ISLAMABAD- In order to divert the direction of the class contradictions in society, the world capital hatched a hype of propaganda: “Clashes between civilizations and religious entities”, which is subsequently manifested in the form of serial mayhem inside mosques, Churches, Temples and other places of warship in various parts of the world. Xenophobia, Islam-phobia and several other terms of phobias have turned human into a horrific beast.

In present civilized world when someone can’t even  hit  a bird or an animal out of petty , an indoctrinated fanatic can cut fellow humans with such impunity, like one cutting vegetables. Terrorist and inhuman acts against Muslims ,Dalits , Kashmeries in India and in Pakistan against Hindus , Christians , Ahmadis , Shias Pashtoon , Sindhi and  Baloch ethnic intellectuals or likewise violence and oppression of the migrants especially non whites and Muslims in Europe and America is the same dirty face of the capitalist engineered  intrigues . Being cognizant of the social and economic disparities in the society which can obviously trigger a unified organized movement of the have-nots against capitalism and imperialism, the later, bringing ethnic and religious divide to escape its own end.
People of the world must unite together against capitalist imperialist imposed socio-economic disparities and its chain of exploitation. Capitalism has interred into a phase of bestiality, which must be buried now and forever, in order to emancipate humanity from the clutches of poverty, miseries, wars and hatreds.
Political Bureau CP Pakistan.

* * *
WORLD FEDERATION OF TRADE UNIONS (WFTU): SOLIDARITY WITH THE PEOPLE OF SOUTHERN  AFRICA AND INDONESIA.

ATHENS- The World Federation of Trade Unions, which is the militant voice of 95 million members in 130 countries in all corners of the globe, expresses its internationalist solidarity with the working class and the ordinary people of the Province Papua in Indonesia, as well as with the workers in Zimbabwe and Mozambique, strongly affected by the recent extreme weather conditions and cyclones.
In Papua, Indonesia, dozens of people have been killed and thousands have been forced to move from their homes, after the floods and mudslides caused a few days ago by torrential rains, while in Zimbabwe and Mozambique 127 people have lost their lives and a lot more are missing after the passage of the Cyclone Idai.
We stand by the side of all workers and poor people of Indonesia and Southern Africa, conveying our sincere condolences to the families of the victims.
Once more it is shown that all over the world, it is the poor people who die unprotected during floods and cyclones, they are killed in earthquakes and burnt during wildfires. We strongly denounce the lack of adequate protection measures against extreme weather conditions and natural disasters, that every time leave dead and homeless persons.
We call on the responsible authorities of the affected countries to restore the damaged areas and support the people of Southern Africa and Indonesia both by measures of immediate help and with the construction of the proper infrastructure that will protect the people in case of extreme weather phenomena.
THE SECRETARIAT.
* * *
ISRAEL: SUPREME COURT OVERTURNS BARRING ON HADASH' CANDIDATE 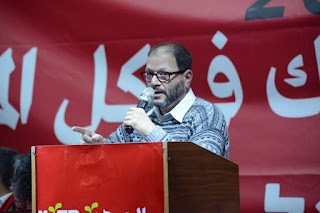 JERUSALEM- Israel’s Supreme Court overturned on Sunday, March 17, the disqualifications of Dr. Ofer Cassif, a Communist candidate from the Hadash-Ta’al political alliance, and the entire Balad-Ra’am (United Arab List) bloc from running in the April 9 general elections. The nine justices also unanimously confirmed Hadash-Ta’al’s right to run in the elections, which was being appealed before the court following the Central Elections Committee’s rejection of a petition calling for Hadash-Ta’al’s disqualification. The court did on Sunday ban Kahanist leader Michael Ben Ari from participating in next month’s electoral contest.
Earlier this month, the Central Elections Committee disqualified Dr. Cassif and the Balad-United Arab List, in opposition to the expressed opinion of Attorney General Avichai Mendelblit. That same day, a petition against Ben Ari, the chair of the far-right and racist Otzma Yehudit party, failed to pass the committee, thereby giving him the right to run in the elections.
The court’s decision to allow Cassif to run was made by an eight to one majority. Its decision to allow the running of Arab joint slate Balad-United Arab List was also made by an eight to one majority. The nine justices unanimously approved Hadash-Ta’al to run in the election.
Sunday’s decision sets a precedent, as it is the first time that a single candidate – as opposed to an entire list – is barred from running, since the Knesset enacted the law allowing the banning of a specific candidate in 2002.  The court’s decision to ban Ben Ari is backed by the opinion of the Attorney General, who stated that he was in favor of disqualifying the former MK from running for the 21st Knesset on the grounds of his incessant incitement against Arabs and a significant mass of evidence to prove it.
Dr. Cassif, a lecturer in political science at the Hebrew University of Jerusalem and Hadash activist from 1988, said he was “happy justice has been served,” adding that this was a “shameful political attempt by the Kahanists sponsored by Netanyahu.” Cassif said that “despite the efforts to narrow the democratic space [of Israel] and silence voices opposing that discriminatory regime, I will continue to talk about ending the occupation and strive for peace and equality.”
Chairperson of the Hadash list MK Ayman Odeh said in response to Sunday’s decisions by the Supreme Court: “The attempt to silence Arab slates is a racist and abhorrent effort by those who are afraid of Arab-Jewish cooperation. They are so afraid of losing power that they are willing to lay a red carpet before those who call for the transfer of Arabs and for supporters of racial theories and violence.”
* * *
COMMUNIST PARTY OF SUDAN: MASS DEMONSTRATIONS MARK THE 85TH DAY OF THE UPRISING.

KHARTOUM- Thursday, 14th March, was a major day in the revolutionary history of our country. Tens of thousands of peaceful demonstrators took to the streets of KHartoum, Omdurman, Khartoum North, Atbara, Alfashir, Algienena, Alobeied, Kasala, Sinar, Madeni and Berber, marking the 85th day of the uprising. The tens of thousands of people who occupied the streets of the major cities, defying the heavy handedness of the security forces and their use of excessive force, was a clear response to the call by the forces of the ‘Change and Freedom’ alliance that groups the major political and professional organizations. At the same time, these mass actions were a resounding rejection of Albashir’s new government and signalled the determination of the masses to defeat and challenge the imposition of the state of national emergency by the regime.
- While continuing the struggle to topple the regime, the masses scored a great victory by achieving the release of female detainees from Omdurman prison.
- Still languishing in Albashir’s prisons are hundreds of political leaders and activists. Among them are 16 members of our party’s Central Committee, including Mohamed Mokhtar Alkhateeb, Masoud Alhassan, Siddig Yousif , Sidgi Kablo, Ali Saied, Hashim Mirghani and Salih Mahmoud.
- The struggle of our people is reaching an advanced stage, based on the unity of the opposition forces and the tireless efforts of the Sudanese Communist Party to further strengthen the unity of action of all the forces that oppose the regime and continue on the path to reach the point to use the general political strike and mass disobedience to fetter the hands of the regime and topple it.
- WE must stress that while our people are scoring daily victories, imperialist forces and local and regional reaction are continuing to hatch their conspiracies in vain attempt to split the ranks of the opposition and halt the advance of the people. This is reflected in feverish plans for meetings outside the country, under the cover of dialogue. with the sole aim of advancing plans to widen the social base of the defunct regime and include new forces that can give a kind of representivity to the regime. It is within this context the US Administration and the governments of Egypt, Qatar, Turkey and France are increasing their support to the regime.
- The Secretariat of the Central Committee of the Sudanese Communist Party calls on all fraternal parties to redouble their solidarity actions and demand the immediate release of all political detainees, including the leaders of our party.
Secretariat of the Central Committee
Sudanese CP.