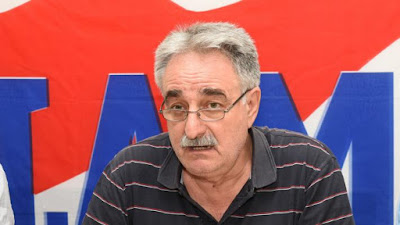 Trade Unionists and workers affiliated with PAME denounced the mafia methods within the trade union movement used by the GSEE leadership of G. Panagopoulos. During a press conference held by Regional Trade Unions and Federations, the member of the Secretariat of PAME George Perros noted the following:


"In the last few days we are facing this unprecedented phenomenon. A trade union organization, that is the leadership of GSEE, to be afraid of the presence of the workers and its members, to request the presence of Police and Special Forces, to request a prosecutor to protect them from the representatives of the workers and finally to name the workers as “bullies” and theirhenchmen as “workers”.
This trade union mafia characterizes the workers as henchmen. Who? It was them that brought thugs and criminals in trade union procedures; we have published photos and videos from all this mechanism of thugs coming in the trade unions, injuring elected trade unionists and calling themselves “workers”
They are talking supposedly about democracy and democratic procedures. Who? Those that for 4 days were closed in luxury hotels, eating and drinking every day in wealth and luxury. They are talking for democracy, them that wanted to set up ”fiestas” on workers’ backs, with spectacular events behind closed doors, with thugs and private security.
They wanted to make a parody congress away from the workers, a congress with terms-we say it again- of trade union mafia. That is the reason they chose once again, to be away from where the working class is and chose luxury 5 star Hotels in tourist resorts.
The reason is obvious! They did not want to have a real congress; they did not want to have an actual discussion. They only thing that they care is to set the ballot box, to keep their “chairs”.
If the congress started, then all the stink of their election frauds, all their mechanisms would have been revealed. All the CEOs and managers, the number of golden boys that they planted inside the trade unions would have been exposed.
For all the above we have informed the workers and we will not stop here. Since this morning, the elected trade unionists, trade unions that rally with PAME have started tours, they are going to every workplace.
They know very well that the class-oriented movement of this Country is not afraid of the Capitalists, fake unionists, thugs nor state repression. It has learned to fight and struggle in tougher conditions, thousands of pioneer workers- trade unionists gave their lives fortoday’s workers to be able to have their trade unions. We will not surrender them this History!
For us, the counterattack, the real reconstruction of the workers- trade union movement begins inside the workplaces.”