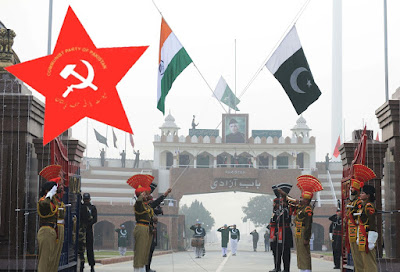 The current escalated frenzy of jingoism between India and Pakistan, has created a nonsensical combatant environment in the whole region, followed by heavy cross border shelling and air bombardment which is a total wastage of the national capital in the air.
No doubt this tension is in the best interest of the religious fanatics and the military establishment, but it has nothing to do with the peoples well-being of both the countries.

Over 700 million people in both the countries are subjected to starvation , miseries and even a bigger number is without work. Peasants / workers / unemployed , under heavy debts are compelled to commit suicides and others have to sell their children and body parts in order to survive in this system of savage capitalism.
In the given conditions , the ruling classes must be ashamed of having delivered nothing to the public. This uncalled war madness is a pretext for the military to grab mammoth increase in its budget supplies .
The present so called elected democratic governments in both the countries are two sides of the same coin . Both playing to the gallery of their dirty political ambition and in larger canvas serving the interests of the imperialist masters and arm dealers .
CP of Pakistan strongly condemn the ongoing bellicose environ between the two countries . CP of Pakistan admits that both India and Pakistan are twin natural neighbors, holding very important geopolitical position in the region of Asia, all the outstanding issues must be resolved through political dialogue, respecting peaceful coexistence of each other . Both must fight together against poverty, diseases , unemployment, homelessness, fascism , increasing fanaticism and moral degradation .
For this very sane reason Communist Parties , Progressive and Peace Democracy loving forces on both sides should unanimously resolve to press upon the rulers and the military establishment in their respective countries to shun away the pursuits of war in lieu of peace , jobs and peoples harmony, diverting all the resources towards the welfare of the people instead of dumping it in fire fodder .
Politburo Communist Party of Pakistan .
27.02.2019.