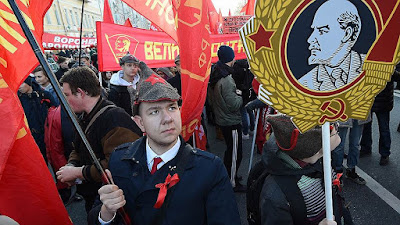 Tsarist Russia used a different calendar to modern Russia, so the actual day of the October (25th) Revolution falls in November (7th). Holding red flags and portraits of the revolutionary leaders Vladimir Lenin and Joseph Stalin, thousands of people marched towards Teatralnaya Square next to the Kremlin.


Galina Aksyonova, member of the Communist Party, said: "I am in a wonderful mood. This is a day of world importance, November 7; it turned the whole world upside down 101 years ago."

"This revolution gave land to the peasants, plants and also factories – to the workers. It gave us equality." Indeed, the October revolution brought an end to more than 300 years of authoritarian and regressive Tsarist rule.

In his speech, the Chairman of the CC of the Communist Party of the Russian Federation (CPRF), Gennady Zyuganov, pointed out: "The October Revolution did everything to make a laborer feel dignified. When we stuck to the ideals of the revolution, fairness and also friendship of peoples – we were respected and valued in the world."

"Today - Zyuganov said - as you see, they have surrounded us with military bases, they are trying to impose sanctions on Russia. Neither Americans nor the NATO needs us to be free and successful. In Soviet times, we used to be the most powerful, the most heroic and the most victorious." 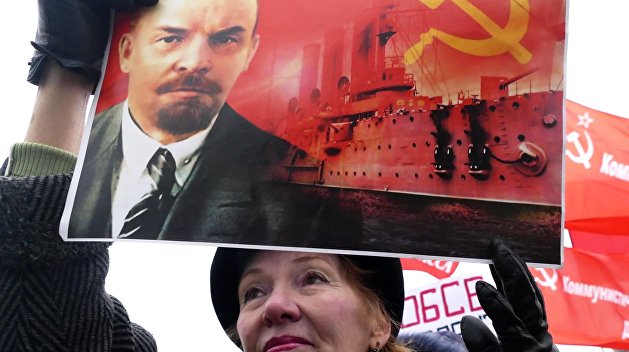 In a statement for the 101st anniversary of the October Socialist Revolution, the Russian Communist Workers' Party (RCWP) calls the 1917 Revolution "the main event in the history of mankind, the main holidary of the working people of the world" and points out, among other things, that "the tremendous achievements of the USSR confirmed the correctness of the path chosen by the working people, confirmed the correctness of the Marxist-Leninist teaching on the inevitability of overthrowing the dictatorship of the bourgeoisie and establishing the dictatorship of the proletariat by a revolutionary way".

"The historical development of society does not stop anyone and not turn back. The fight will continue. Our cause is right. The enemy will be defeated. Victory will be ours!" writes the Russian Communist Workers' Party statement.