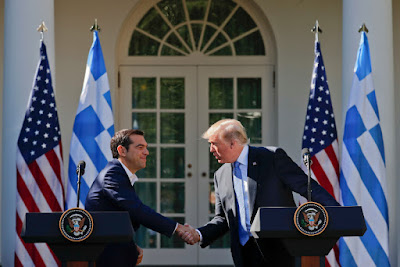 The SYRIZA-ANEL government must immediately inform the Greek people regarding all the agreements and commitments it undertook. It is certain that it has agreed to extend and upgrade the US-NATO bases in Greece, especially the one in Souda, as well as to upgrade the F-16 aircrafts, which are related to NATO's aggressive activities and not the defensive needs of the country, and for which the Greek people will have to pay 2.4 billion, while the government "bleeds" them in every possible way.

After all, as the Security Cooperation Organisation for Defense Security of the U.S. Defense Ministry says, the proposed sale will contribute to the U.S. foreign policy, by strengthening the security of a NATO ally, and will enhance the Greek Air Force's ability to support NATO and continue its operations in the future.

Any U.S. investments will involve business corporations which will benefit from the labour jungle, the divestiture of public property and the exploitation of the country's energy resources. They will be related to the greater dependence of the domestic defense industry on the U.S. war-industrial cluster. They will be related to energy projects, such as the extraction of valuable hydrocarbon deposits, from which the Greek people will have no benefit, as well as the transfer of U.S. natural gas by Greek shipowners.

Even the debt issue, to which only a little reference was made, is directly linked to rivalries between powerful capitalist centers (mainly USA-Germany) which do not challenge the antipeople measures and the restructures that are being promoted against the people.

It is evident that Greece is "upgraded" as a base for imperialist interventions and wars in the broader region and as a point of reference for U.S. policy in her dangerous competions with other powers, e.g. Russia. That is what the government and the USA mean when they say that Greece is a factor of stability and peace.

It is also evident that the SYRIZA-ANEL government claims- on behalf of the Greek capital- an upgraded role in the share of the prey of wars and interventions in the region, from the bazaars for the energy routes which are paved with the blood of the people, with refugees and poverty. For that reason, the rest of the parties unanimously supported Tsipras' trip to the U.S., even by bidding for the commitments the government must undertake.

The arguments that the upgrading of the relations with the U.S. can protect the country's sovereign rights, as well as peace and security, is fake and historically bankrupt. Equally deceptive is the claim that Tsipras' trip to the U.S. will bring benefits for the country, because the U.S.-Turkish relations are currently being tested.

Greece's participation in NATO and the country's involvement in interventions and wars, all these years, did not protect her sovereign rights. It is not a coincidence that Trump didn't say a word both about the Cyprus Issue as well as about the Turkish violations in the Aegean, which NATO itself recognizes as a single operations space, without borders. Greece's modern history has several examples of how alliances have been rearranged within seconds and our supposedly "robust allies" became a source of modern tragedies that the people have paid with their blood.

The Greek people must react massively against the new agreements of the government with the U.S.; agreements which involve the people deeper in the geostrategic competitions and bring new big dangers. The people must turn their back to the embellishment attempt of U.S. imperialism which proves that the SYRIZA-ANEL government does not hesitate to offend even the historical memory and the struggles of the people in order to serve the interests of the capital and to sow the venom of subordination supposedly as one-way road. The people, with their struggle and solidarity, can open a radically different road, in rupture with the power of the capital and imperialist organisations such as NATO and the EU.