The pensioners who protested against the complete destruction of their lives got a response from the police forces of Mr.Tsipras' government. That response was the use of pepper spray and tear gas against older people! 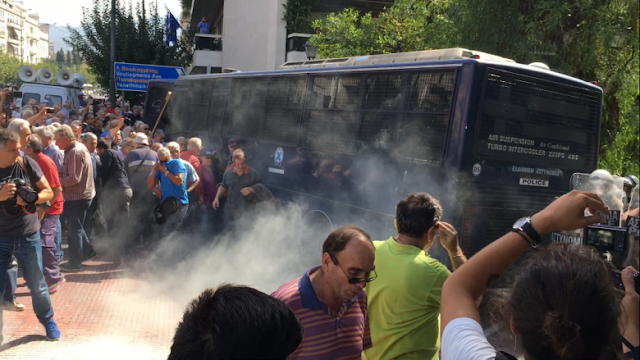 About 1,000 people, some of them with canes, took part in Monday’s protest. Dozens of protesters at the front of the rally tried to break through a police cordon and chanted “Shame on you, shame on you!”

The protesters were trying to tip over a riot police bus when officers fired the pepper spray.

Greece’s left-wing government has imposed new cuts on pensions this year as part of its bailout commitments to international lenders, with the International Monetary Fund pressing for deeper cuts.

Following the police attack against the retirees' protest, the Press Office of the CC of the Communist Party of Greece (KKE) issed the following statement:

"A day after the governmental fiest in Kesariani, which had as an obvious aim to give an alibi of "leftism" (to the government) and to "wash out" the antipeople policy, the SYRIZA-ANEL government showed its real face by ordering the attack, with riot police and tear gas, against retirees who were demonstrating for the cuts in their pensions and asking to meet the Prime Minister.

Once again it is proven that that the implementation of the antiworker-antipeople policy goes hand by hand with repression and authoritarianism against the working people, the popular strata who assert their rights".