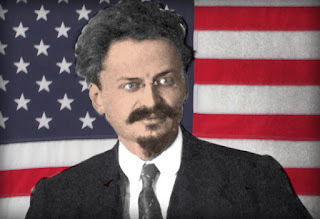 Not content with these examples, Smith, in McCarthy-like fashion, feels the necessity to name further names. He sees the UK’s Stop the War coalition as also duped by the Stalinists, along with the US United National Anti-War Coalition (UNAC). Jill Stein of the Green Party and her Vice Presidential partner, Ajamu Baraka, are similarly infected with the “Stalinist” virus.

Laughably, he ominously links the recent bold, fact-finding mission to Syria organized by the US Peace Council to the “American Communist Party,” an association meant to conjure up the specter of Stalin; but it is an untenable association with a moribund CPUSA that has long distanced itself from “Stalinism” and the Soviet legacy with a fervor equal to the US Trotskyist groups.

Without re-visiting the old ideological wars (Trotsky has been dead for 76 years, Stalin for 63 years, and the Soviet Union for 25 years), it is nonetheless useful to point out a common characteristic shared by US Trotskyist organizations: they invariable live and breathe anti-Communism. Since the Cold War began, they traded on their distance from the “enemies” of Western Imperialism. The grip that these groups often had on middle class youth was predicated on the denial of Red connections.

For a university student, the McCarthyite stigma of Communism could be evaded by joining an anti-Communist organization that proclaimed that its anti-Communism was even more radical than Communism!US Trotskyism is part of the “Yes, but…” left. Yes, Communism, Stalinism, Maoism, Marxism-Leninism, etc. etc. are bad, but we’re not like that! Like you, we’re against them, too! We’re the unthreatening, friendly advocates for change…

In the Cold War period and after, this was a safe tactic to appear radical without poking the bear of repression. Of course it didn’t always fool those entrusted with thwarting even the most lame rejection of capitalism.Communists victimized by Cold War repression often joked that a US socialist was someone without the guts to be a Communist. The easy assimilation of much of the Trotskyist intellectual apparatus into the anti-Communist hierarchy and the subsequent entry of many into ruling circles certainly underscores the opportunism of this tactic.

Since the demise of the Soviet Union, US Trotskyism has been in crisis. With the departure of a foil of sheer evil, the appeal of anti-Communist radicalism has lost its punch. Apart from the intellectual Neanderthals serving Eastern European reaction (sponsored by the New York Review of Books, The Washington Post, and a few other inveterate anti-Communist organs), the epithet “Stalinist!” means little in current discourse.

Ashley Smith hopes to revive its relevance for the twenty-first century. He sets out to buttress Trotskyism as a thin and tortured alternative to the anti-imperialism of the “Stalinists.” As with his Cold War predecessors, Smith hopes to trade on distancing Trotskyism from the rivals or antagonists of US and European Imperialism. In the absence of a Soviet Union, capitalist Russia will suffice as the source of evil.

And Syria’s Assad will play the role of the bloodthirsty despot-- a mini-Stalin-- in this Trotskyist fantasy. Smith offers an unvarnished choice: “Which side are you on? Do you support the popular struggle against dictatorship and for democracy? Or are you with Bashar al-Assad’s brutal regime, his imperial backer Russia, his regional ally Iran and iran’s proxies like Hezbollah from Lebanon?”

It is breathtaking how simplistically, but presumptuously Smith characterizes the Syrian tragedy. It is equally astonishing to recognize how wrong he gets it.To be so blind to sources of information apart from Western reporters in Beirut, Amman, and Ankara, to rely principally upon a London-based, unfiltered, and non-independent anecdote collector like the Syrian Observatory for Human Rights, and to credit US and European sponsored “revolutionaries” implies an indifference to the pursuit of truth.

Whatever grievances Syrians may have had against Assad, it is hardly credible to hail an armed struggle that began literally weeks after the alleged peaceful demonstrations that Smith praises. No insurrection has ever proceeded so swiftly and effectively against security services and a modern army without outside assistance. We now know from revelations exposed by the US media’s fixation on the Benghazi fiasco that the CIA was vigorously engaged in shipping weaponry to Syria from stockpiles snatched from its Libyan venture. We know that regimes on the Arabian Peninsula were equally vigorous in supplying military equipment and recruiting volunteers.

Even US and Western European sources concede that the most numerous and most effective anti-Assad fighters are not democrats or reformists, but radical fundamentalists driven by religious fervor and feudal ideology, hardly the idealistic revolutionaries portrayed by Smith. In fact, US and European advisors complain of the difficulties of vetting anti-Assad forces sufficiently credible to receive advanced weapons. The few recipients of US supplied anti-tank missiles have displayed a troubling propensity to pass them on to the worst of the worse jihadist.

Smith shows an enormous conceit, from his secure perch, joining Western politicians in intuiting the sentiment of the Syrian people. Cavalierly dismissing the Syrian elections, he-- along with the Western media-- somehow divines that most Syrians hate Assad and that the opposition overflows with democratic, progressive sentiment. Where we have evidence of an independent vote-- for example, the May, 2014 national election vote of Syrian refugees in Lebanon-- the Washington Post’s rabid anti-Assad reporter, Liz Sly, conceded that uncoerced refugees supported Assad.

One has to notice that, unlike previous chapters of the so-called “Arab Spring,” there are no embedded Western reporters recording the march of democracy or the defeat of tyranny. Cannot CNN find any democrats in the Syrian opposition? Are there no freedom-loving fighters for NBC reporters to interview?Of course the Assad regime’s invitation to allow Western reporters goes cynically unaccepted. To find on-the-spot reporting from Syrian battle zones, one has to turn to Lizzie Phelan, an independent UK journalist whose frequent front line footage appears most often on RT (her recent 20-minute cab ride through Aleppo gives a decidedly different picture of the city from that rendered by Western media reporting a Syrian “Stalingrad” from afar).

Smith does not hesitate to embrace the Libyan debacle as a pro-democracy revolution as well. One would think that the disastrous destabilization of Libya would serve as a sobering tonic for Smith’s fantasies. As with Syria, the pro-democracy revolutionaries were largely a figment of the imagination of US and European politicians and journalists, a group that our erstwhile “socialist” seems happy to join. But that is not just my opinion or the opinion of other “Stalinists.” On Wednesday, September 14, the UK parliament’s cross-party Foreign Affairs Committee released a report on the UK’s 2011 intervention in Libya. According to The Wall Street Journal, the committee found that the engagement was “based on ‘serious erroneous assumptions and an incomplete understanding’... [and] failed to identify that the rebels included a significant Islamist element and that the [Gadhafi] threat to civilians was overstated.” (my italics) It is striking that the UK government can shed its illusions, but Ashley Smith clings to his.

It is no accident that Ashley Smith’s long essay makes only a passing mention of workers or class. Like most US Trotskyist organizations, ISO draws support significantly from the petty-bourgeoisie. Thus, the question of workers and their fate never arises in his argument. There is no notice taken of the Syrian General Federation of Trade Unions, a supporter of Assad, an opponent of class collaboration, a leader in Arab trade unionism, and a pillar of the class struggle trade unionism of the World Federation of Trade Unions. There is no attention to either the opinions of workers or the effect of a violent insurrection upon the working class. These issues are of little count for one who calls for all to “collaborate with Syrian revolutionaries” who exist only in the minds of political romantics.

Rather than concern himself with the fate of Syria’s working class, Smith prefers to repeat the US and European media’s obsession with civilian-targeted barrel bombs and poison gasses, claims that have defied objective verification. But he exceeds Western fear-mongering by attributing the entire UN estimate of 400,000 deaths in the war to “Assad’s massacre.” Recently, a delegation organized by the US Peace Council visited Syria and met with a number of Syrians, their organizations, and even oppositionists. They left the US with the notion that Syrians should decide the fate of Syria. They returned with the same notion, but even more strongly felt.

But, in addition, they returned with the view that events in Syria are far more complicated than the simplistic picture presented by the US State Department. They returned with the idea that peace in Syria would not be secured through the intervention of foreign powers or by supporting media-manufactured fantasies. Unfortunately, many on the left like Ashley Smith and some in the more conservative peace groups do not want to hear the Peace Council report, preferring to embrace the self-serving constructions of the regime-changers.