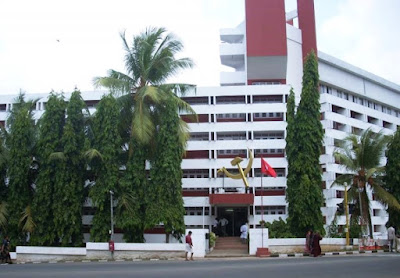 On June 1st, unidentified cowards attacked the Kerala state committee headquarters of the Communist Party of India (Marxist) in Thiruvananthapuram. Police said the explosive substance was hurled at the AKG Centre, situated in the heart of Thiruvananthapuram, by a motorbike-borne man at around 11.30 pm.

In a statement the Political Bureau of the Communist Party of India (Marxist) strongly condemned the bomb attack and expressed confidence that “the state government will investigate thoroughly and punish the culprits.

Additionally, the Political Bureau of the CPI(M) called upon all democratic forces to condemn this cowardly attack and peacefully protest guarding against falling prey to any provocation.

In a communique published in 902 portal, the International Relations Section of the CC of the Communist Party of Greece (KKE) points out:

“The KKE unequivocally condemns the bomb attack in the offices of the Kerala Organization of the Communist Party of India (Marxist). This is a disturbing development and an escalation of the attacks that have been recorded in the preceding period against the Indian Communists who are at the forefront of defending the demands of the country's workers and the popular strata.
The people of India are experiencing the results of the anti-people policy of the bourgeois Modi government, which is in favor of the big monopolies, combined with the complex situation that is being unfolded by the rise of prices in basic consumption goods due to the evolving imperialist war in Ukraine. The KKE expresses its firm solidarity with the CPI(M) and the struggling Indian people."