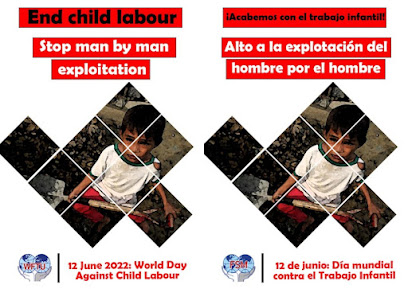 Even after two decades of the launch of this day by the United Nations in 2002 to focus attention on the global extent of child labour and the international initiatives of action and efforts to eliminate it, the evil thrives deeper in the exploitative system of capitalism. Recent survey of UNICEF reveals the dismal fact that a whopping number of 160 million children-a staggering one in ten worldwide- are involved in labour considered to be mentally, physically, socially and morally harmful. Children as young as 5 years of age are performing the hazardous jobs such as underwater mining, heavy lifting, the handling of dangerous factory machines etc,. Majority of the children are engaged in agriculture where they handle poisonous chemicals. Of these 79, million are regularly involved in jobs that pose an immediate danger to physical and mental health.  One in four of all victims of trafficking are children involved in forced labour. Child slavery is still persistent. According to the International Labour Organisation 22 thousand children die every year while at work.

Child labour in the world has risen to meteoric heights in the last two years. Between 2016 and 2020 — for the first time in 20 years — the number of working children worldwide has increased. The unprecedented economic impact of the Covid-19 pandemic is pushing children into exploitative and dangerous child labour further.

ILO Conventions C138 on the minimum age for admission to employment and work and C182 on the worst forms of child labour do not seem to have brought any reasonable change. In fact C 182  is the most rapidly ratified Convention in the history of the ILO. Universal ratification of Convention 182 was the historic first. But in reality it has not done much to provide legal protection against the worst forms of child labour.

WFTU is committed to its objective to establish an equitable world order which will ensure to everyone the possibility to develop and thrive as human beings. We shall recommit ourselves to this objective and intensify our actions to end the inhuman exploitation of children.  There is more than enough wealth on this planet to give a decent childhood to every single one of the 1.6 billion children living worldwide.

On this International day against child labour,  WFTU vows to fight to end the exploitative economic order,  to bring in an equitable and socialist society where every child will cherish the right to grow to be good and productive humans.