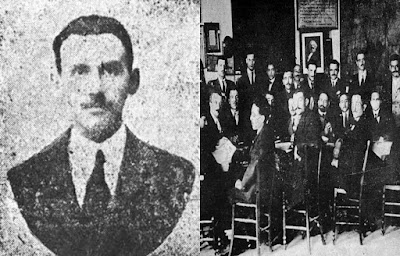 Demosthenes Ligdopoulos was born in Athens, Greece in 1898. At the age of 18, in 1916, he was enrolled at the University as a mathematics student. On the same year, alongside his co-students Sp. Komiotis, Fr. Tzoulatis and Tzoumas brothers, he founded the “Socialist Youth” of Athens. Since then, the socialist ideas and the labor movement became an inseparable part of his life. The Great October Socialist Revolution in 1917 was an event that ignited the flame of Ligdopoulos' revolutionary thinking and activity.

The “Socialist Youth of Athens” developed a significant activity, especially after the October Revolution, while it participated in the first Panhellenic Socialist Congress which aimed to merge all the Greek socialist organizations under a common party. The outcome of the Congress was a milestone in the political history of Greece: The foundation of the Socialist Workers' Party of Greece (SEKE), later renamed as the Communist Party of Greece (KKE), on November 1918.

In this Congress, which took place on 17-23 (4-10 under the Julian calendar) November 1918 in Piraeus, Ligdopoulos militantly supported that the new Party should adopt a Marxist-leninist program, contrary to the “western socialism” expressed by the Second International. Being affected by the heroic stance of the Bolsheviks in Russia, Ligdopoulos became a strong proponent of the Marxist-leninist ideals and succeeded to incorporate them in the Congress' decisions.

An important point of the Congress was Ligdopoulos' speech about the character of the then “League of Nations” which, mutatis mutandis, is still relevant today as far as it highlights the role of the imperialist states and their unions against the people. Here is what Ligdopoulos had said:

“For more than a hundred years, three emperors came together and along with other kings decided to rule the people in the future under a christian way. What a fine purpose for the bourgeoisie, at least for those who wanted a king. But the actual purpose was to suffocate every liberating spirit by the people who, inspired by the French Revolution had begun to feel the deep authoritarian yoke. If the Greek Revolution did not receive help by the European governments, despite the philhellenism that existed in Europe at that time, this holy alliance was the reason. At the beginning of our century, some bourgeois and kings established a palace for peace in The Hague. Unfortunately, the nice words and the marble buildings didn't prevent the terrible war.

This happened because wars are always created out of economic reasons. That said I will ask the delegates to think about the issue of the League of Nations. For us, today's war an intensification of the industrial competition, a crisis, a clash for the colonies.
The bourgeoisie, frightened by the results, asks to be restrained at first with sociological gospels. We will no longer have new wars, we will have a society of nations. This society will decide for all disputes. Ah, now they have stopped telling us that wars are necessary evils, that there will always be wars, that wars is a good thing. But now we will tell them. Yes, wars are a necessary evil, a bad consequence of the capitalist mode of production. They will end only when the mode production of today's society ends. But what will be the formation of the society of nations? Who will take part in it? Only the bourgeois? Bourgeois and workers? Or workers only? But the bourgeois class of the various states have completely opposing interests. If there was a war it happened for that reason and this conflict of interests is not going to end. By want to believe that it can end, it is like to think that we can stop the class struggle. But they will tell us that the workers, the representatives of the labor unions who will participate in the society of nations will prevent future wars. Fine. But what is the necessity of the society of the nations? The working class is the only one that has the same international interests. She is therefore the only one that can share the same interests. And this society of nations, the international workers' organization is the only one that can be imposed. If this cannot be done, any hope about any other society of nations is a utopia.

I do not think anyone will ask us what harms us. But to the one who will ask, I will tell him. I'm afaid that the only point on which an international bourgeois union can fully agree is to impose herself and fight every manifestation of revolutionary movements in the world. Be aware, comrades, the society of nations that they promise us can play the role of a sacred alliance. After all, you see its principles clearly now. It tries to distort the very elastic terms of Wilson, the freedom of the seas, the freedom of the ethnicities, they try to make peace meetings secret. And imagine the first act of the League of Nations being a savage intervention, as it began or is about to begin against the Russian revolution, against the sacred struggle of the Russian and German workers. It wants to create a Balkan federation under conservative terms against the ever-expanding social revolution. This is the society of nations. I summarize, comrades. I think that the society of nations comprised by bourgeois men, who have declared war, is a danger to hinder the social revolution. I think that is why we have a duty to fight this society of nations and to emphasize that only the working class, which is the only one that has the same interests, can be a safe for the world society of nations”.

At the founding Congress of SEKE (KKE), Demosthenes Ligdopoulos was elected member of the Central Committee, while he was assigned director of the Party's official newspaper “Ergatikos Agonas” (Workers' Struggle). The foundation of the Communist International in March 1919 has its impact on SEKE. On May 1919, the first meeting of the Party's National  Council decided its withdrawal from the Second International and its accession to the Third International (Comintern).

In January 1920, Ligdopoulos represented the SEKE at the conference of the Balkan Communist and Socialist Parties which took place in Sofia, where the Balkan Communist Federation was founded. The 2nd Congress of SEKE, which met in April 1920, confirmed the Party's accession to the Third International, thus accepting the decision made by the National Council in 1919. Ligdopoulos was assigned to represent SEKE at the 2nd Congress of the Comintern that took place in Petersburg (Petrograd) and Moscow in June 1920.
However, Ligdopoulos' trip to Moscow was to be his last one. On the way back to Greece, Demosthenes Ligdopoulos and Orion Alexakis, a Greek-Russian who had been appointed as Comintern's representative for the Balkans, were murdered in the Black Sea by Turkish smugglers of Laz origin and their bodies were dumbed off the Bulgarian coast. The exact date of their tragic death is not known, although it is estimated that the murder took place during the last ten days of October 1920. The actual motives of the crime are still uncertain. Some sources claim that the two men fell victim of robbery while others talk about a premeditated murder organized and executed by agents of the Entente.

The Central Committee of SEKE denounced the murders and stressed out Ligdopoulos' important contribution to the Greek working class movement. “The story of Ligdopoulos is the story of the first period of the Greek Communist Party”, the Communist Review wrote a few months after his death. And, indeed, if something must be said for Demosthenes Ligdopoulos it is the fact that he was a true pioneer of the revolutionary movement in Greece and the country's first communist hero.