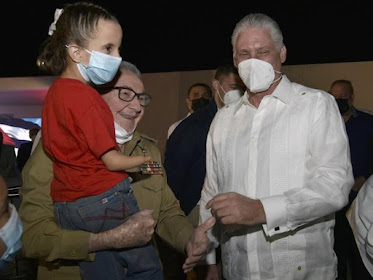 “I am still excited and, I confess one thing, I have cried like everyone here,” said Army General Raul Castro Ruz to the children of the La Colmenita theatre group who, on the evening of November 25, precisely five years after the physical departure of Cuba’s Comandante en Jefe, had the great responsibility of inaugurating the Fidel Castro Ruz Center.
"You have made us cry, with your art, with your patriotism and with your teachers," Raúl told them following their presentation of the musical entitled “Fidel, habla....” (Fidel, speak..) under the direction of Carlos Alberto "Tin" Cremata, which tells the story of a group of children who go to the Sierra Maestra in what they call a Guerrilla for History, to better understand Fidel’s life.

The Fidel Castro Ruz Center, a beautiful, modern institution located on 11th Street and Paseo, in the Havana's Vedado neighborhood, was inaugurated with the moving performance, in which the children also expressed their dreams for the place where all the knowledge and memories of the historic leader of the Cuban Revolution would finally be gathered together.

"We are so proud of you, of this first Colmenita and all those that have been created in so many places," Raul said, surrounded by the boys and girls who minutes before had rocked the Turquino Amphitheater with songs, thrilling texts and images of the Fidel, who, as they said in their play, can only be truly understood with our hearts. 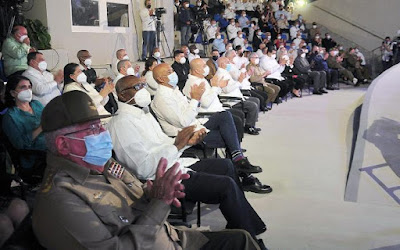 And this is what La Colmenita gave the audience the opportunity to do on this cold night, during a memorable event also attended by Party First Secretary and President of the Republic Miguel Díaz-Canel Bermúdez; the President of the Bolivarian Republic of Venezuela, Nicolás Maduro Moros; leaders and heroes of the Cuban Revolution; as well as relatives and friends of Fidel, among them the Brazilian theologian Frei Betto.

As in other works by the company - and what evidently gives meaning to the art of Tin's troupe - the children went in search of the essences, "the ultimate truth, the most important thing, what fills in the silhouette we see of all things." They ventured this time to the essences of an exceptional human being who could tame time, and do so much in one lifetime.

"We will never forget this event, which was the most exciting thing I have ever seen in my life," Raul revealed, minutes before leaving the Fidel Castro Ruz Center, which last night opened its doors with the mission of investigating and disseminating his thought, his work, his life and example. A place born in Cuba so that all of us can get closer to one of the greatest men in history, with open hearts.