Madrid: Young communists paid tribute to the Centenary of the Communist Youth of Spain 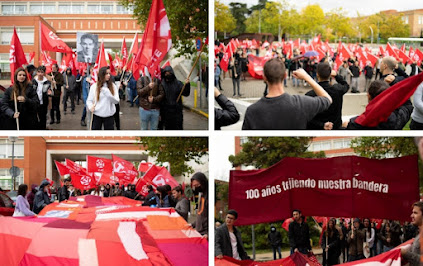 On Sunday 31 October, the Collectives of Communist Youth (CJC) held an act in commemoration of the Centenary of the Communist Youth of Spain, the first communist youth organization in the country.

This act was dedicated to all militant communists who resisted to Franco's fascist dictatorship and who stood firm against the trends of opportunism and euro-communism.
Hundreds of young people, members and supporters of the CJC gathered in Madrid raising the red flag as a symbol of fight against the misery of capitalism. Under the slogan “100 years of weaving our flags”, the young communists marched through Ciudad Universitaria and continued in Avenida Complutense.

The Collectives of Communist Youth (CJC) is a affiliated with the Communist Party of the Workers of Spain (PCTE) and participates in the World Federation of Democratic Youth (WFDY).