Workers Lives Matter: Solidarity with the struggle of Cosco workers in Greece 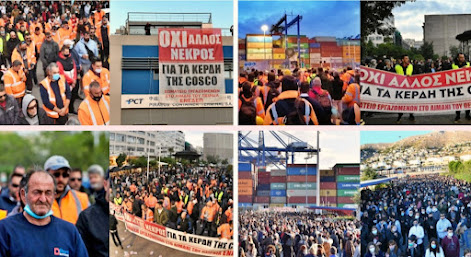 On Monday 25th October, 46 year-old dockworker Dimitris Daglis was killed at pier 2 at the Cosco-owned Piraeus Port Container Station, after he was fatally hit by a crane bridge.

"It's not the 'bad' moment. It is a result of the intensification of work, the lack of safety measures for our health and our integrity ", the Union of Container Workers at Piraeus Port (ENEDEP) underlined in its statement, declaring a strike in response to the tragic event.

Since Monday, the workers at the Cosco docks in Piraeus Port are on strike, demanding the implementation of specific safety measures. From its side, the administration of the company has turned down the workers' proposals.

Throughout the week, the Union has received numerous solidarity messages by Trade Unions from Greece and abroad. The hashtag #οι_ζωές_των_εργατών_μετράνε (Workers Lives Matter) became a trend on Twitter.

Yesterday, a massive rally was held at the gates of COSCO docks in Piraeus, with the Union ENEDEP and the working class of Piraeus giving a militant decisive response to the multinational.

With the family of the dead worker taking part in the rally the workers decided to continue the strike on Friday also demanding the implementation of measures that will guarantee the safety of the workers. Measures such as the crews to have 6 members instead of 4 that is today, to stop back-to-back shifts that will lead to exhaustion and increase the possibility for accidents etc.

Important moments during the rally was when the dockers hanged a banner at the building of COSCO with the slogan “No more workers’ dead for the profits of COSCO”.

Also when from the speakers the Union announced that in Turkey and in Italy the members of World Federation of Trade Unions (WFTU), Nakliyat Is and USB were organizing protests of solidarity in front of Cosco offices in Istanbul and in port of Livorno in Italy and USB representative who expressed the support of Italian workers to the rally through telephone.

Special moment was the Union announced that the court, where the employers filed to cancel the strike, the court did not call the strike illegal!

The union expressed its gratitude to all unions from all over the world that sent messages of solidarity and supported their struggle.In his speech, the President of the ENEDEP Union, cadre of PAME, Markos Bekris highlighted

“Dimitris’ death was a premeditated crime. This is proved by the fact that on the specific bridge on which the tragic accident took place, resulting in the loss of our colleague, not all the necessary measures had been taken to protect his life and all of us… this crane bridge, which passed over our colleague, is an example of the working conditions that prevail in the port. In order for the employer not to put his hand in his pocket, in order for COSCO not to waste any euro, when its profits are unprecedented, they sacrificed our colleague Dimitris Daglis.

We are not ashamed to shed tears for our colleague. And as we work hard, we also know how to fight hard and honor our dead with our struggles! And we can do it.”

On Friday the strike continued with motorcade to the Maritime Ministry demanding the realization of their fair demands .

We remind that the Port of Piraeus, the largest in Greece and one of the largest in Europe, is majority owned by Chinese monopoly Cosco with 67% of shares (16% in escrow shares).

With info from pamehellas.gr, 902.gr