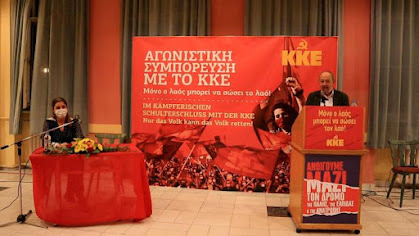 The speaker at the event was Giorgos Marinos, KKE MP, member of the Political Bureau of the Central Committee. Other attendants included KKE MEP and Central Committee member Kostas Papadakis, as well as representatives of the German Communist Party (DKP) and the Communist Party of Turkey (TKP).
As 902 portal reports, in the beginning of his speech, Marinos referred to the death of the 24 year-old Greek immigrant Giorgos Zantiotis at a police station in Wuppertal, pointing out the significant responsibilities of the German authorities which, almost two weeks later, failed to provide any explanation about the tragic event. The KKE cadre also noted the responsibilities of the Greek government and the Greek Embassy which have delayed to inform about what happened in Zantiotis' case.

Giorgos Marinos stressed out the struggles of the KKE in all historical periods, the long-standing ties of the Party with Greek immigrants and its internationalist solidarity. He underlined the escalation of the continuous attack by the capital and its governments in the conditions of the new capitalist crisis, which has been accelerated by the pandemic in Greece, Germany and all EU countries. Furthermore he provided examples which show that a common denominator of all bourgeois governments – liberal, social democratic or mixed ones – is the multiform support for the big capital.

Talking about the international developments, the KKE cadre said that the danger for generalized imperialist wars is an existing threat for the people and stressed the great importance that the joint struggle of the KKE and the Communist Party of Turkey has in these conditions. Marinos also condemned the confinement of thousands of refugees and immigrants at the Belarus-EU border, pointing out that it is the result of the US, EU and NATO imperialist interventions and wars. 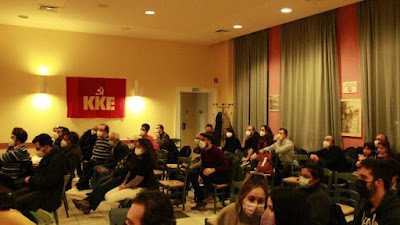 He underlined that socialism is synonymous with social progress because it replaces the criterion of the profit of the few with the satisfaction of the needs of the many. Consequently Marinos referred to the debate over China and the expectations raised about the so-called “socialism with Chinese characteristics”, pointing out that socialism with monopolies, capitalists and exploitation does not, has not and will never exist.

Concluding his speech, Giorgos Marinos called Greek immigrants, students, young scientists who work and study in Germany and who experience serious problems, to join the struggle with the KKE, the party which “is leading the class struggle and has a plan for today and tomorrow, a modern revolutionary Program”.

The speech was followed by a discussion on the KKE's positions, as well as by a cultural event with the participation of Greek and Turkish musicians.