Spain: PCTE to hold its 2nd Congress in Madrid 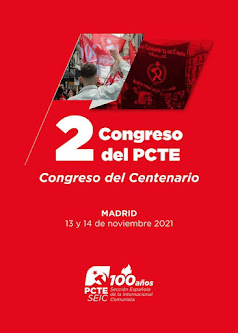 The 2nd Congress of the Communist Party of the Workers of Spain (Partido Comunista de los Trabajadores de España, PCTE) will be held on November 13-14, 2021 in Madrid.

The congress, which coincides with the 100th anniversary of the foundation of the Communist Party of Spain, has been called by the PCTE as the "Congress of the Centenary".

The PCTE is a young but dynamic Marxist-Leninist party founded on March 2019 following a split from the Communist Party of the Peoples of Spain. The party's youth wing is the Collectives of the Communist Youth (CJC) and its official newspaper is Nuevo Rumbo.

PCTE participates in the International Meeting of Communist and Workers Parties (IMWCP) as well as in the European Communist Initiative.