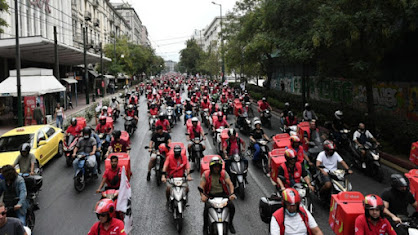 Thousands food-delivery workers held massive moto-protests in Athens, Thessaloniki and other cities all over Greece demanding Jobs with rights and permanent contracts against the threats and blackmails of the company "e-food" (subsidiary of the German multinational "Delivery Hero") which threatened the workers with a text to their phones either to accept becoming a “freelancer” or to be fired by not renewing the three-month contracts.
The workers held massive moto-protests in Athens, to the ministry of Labor, in Thessaloniki, Patras, Larissa and other cities.

The Unions of Catering-Tourism Workers of Athens, Thessaloniki and other cities have called for a 24hour strike for "e-food" workers on Friday, September 24 demanding among other things, the renewal of the contracts with direct recruitment from the “e-food” and into indefinite time with all the labor and insurance rights. Change of the measure of “evaluation”, integration in the Heavy and Unhealthy occupations, no deliveries during extreme weather condition frost, heat, storms, etc. Also infrastructures and places of rest and protection from the weather phenomena.

In a statement issued on Wednesday, the Communist Party of Greece (KKE) expresses its support and solidarity to the delivery workers' struggle and announces that it will re-submit to the Parliament a law proposal for the safeguarding the workers' labor and insurance rights.

Furthermore, the KKE points out that the struggle of the workers will throw into the trash the monstrous law of the ND government and will tear down the whole anti-worker arsenal which the governments of ND, PASOK and SYRIZA have voted together.