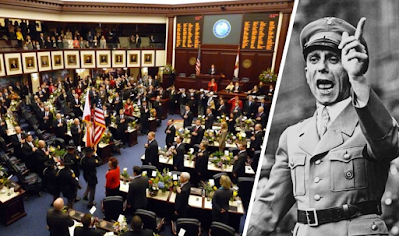 A monstrous anti-communist bill that falsifies history was approved on Wednesday by the Florida House of Representatives. More specifically, according to the bill (HB 1553) students in Florida schools would be taught each year about “how people have suffered and died under communist regimes”!

Furthermore, the bill requires the governor of annually issue a proclamation designating November 7th – the anniversary day of the Great October Socialist Revolution – as... “Victims of Communism Day”!
Public high school students enrolled in U.S. government classes would be required, starting in the 2022-2023 school year, to get at least 45 minutes of anti-communist brainwashing on topics including “Mao Zedong in China, Joseph Stalin and the Soviet System, Fidel Castro and the Cuban Revolution, Vladimir Lenin and the Russian Revolution, Ho Chi Minh in Vietnam and Nicolas Maduro in Venezuela”.

The repulsive anti-communist bill, which intentionally distorts world history, was sponsored by a Republican Party member of the Florida House of Representatives called David Borrero.

Goebbels, the Nazi Minister of Propaganda, would be very proud of this anti-communist brainwashing method which aims to instill U.S. students with monstrous lies and hatred against socialism-communism. The initiators of this bill are very well aware of what they are doing: They want to whitewash capitalist barbarity, exploitation and imperialist wars in the consciousness of the young generation. In fact, 104 years after the 1917 October Revolution the anti-communists in Florida and all over the world tremble before the names of Marx, Lenin and Stalin.

All the progressive people in Florida and the United States, every man and women who believes in a better world without exploitation of man by man, must condemn this shameful bill and demand its immediate repeal.

Anti-communism shall not pass!