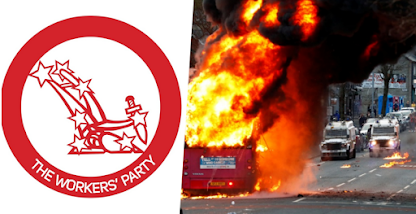 On the occasion of the recent escalation of violent clashes in Northern Ireland, the Workers' Party of Ireland issued the following statement:

"The Workers’ Party, once again, strongly condemns the violence and disorder which took place last night.

This is not the correct way for the Unionist community to air their frustrations and only further fuels the sectarian divide. Elected leaders, Trade Unions and community representatives must use all their influence to deter young people from engaging in this behaviour and instead encourage people to come together, to stand with decency, common sense and progressive ideas which will better serve our communities and our citizens.

Whatever side you live the issues are the same. It is the working class who have been betrayed and it is the working class that continue to suffer. Engaging in violent behaviour, attacking other workers is simply not acceptable and it will serve no other purpose than dividing workers even more.

Those encouraging young people to engage in this dangerous and destructive behaviour should be ashamed for fueling hate and division in our communities instead of enabling discussion and dialogue.