KKE: Statement for the 2019 Workers' May Day 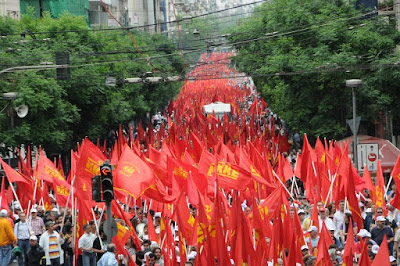 The Central Committee of the Communist Party of Greece (KKE) issued a statement regarding the International Workers' Day - May 1st, which was published in the Party's official gazette "Rizospastis".

Below you can read a translated version of the statement:

"We honor the Workers' Day, the dead workers in Chicago in 1886, the tobacco workers of Thessaloniki in 1936, the 200 executed communists of Kesariani on May 1st, 1944, all the unbending of the class struggle, all those who sacrificed themselves for a society without exploitation of man by man. This is  the only really progressive future of society.

We draw strength from the History of the labor movement in our country and the whole world. The lessons of this epopee are today more relevant than ever. Whatever the working class earned, was gained through harsh struggles, in conflict with the capital and its power, by overthrowing correlations that might be negative and looked insurmountable.

Above all History has shown that the working class, the most pioneering force of society, can, in allience with other oppressed popular strata, overthrow the power of capital, to build a new society which will have in its epicenter the satisfaction of the expanding people's needs. The overthrow of socialism and the global retreat of the workers' movement neither justify capitalist barbarity we are living, nor even more stop the wheel of History which, despite the difficulties and obstacles, always moves forward.

Today, the submission to the negative correlation of forces, the EU one-way street, the dangerous NATO military plans, the barbarity of memorandums, of the bloody surpluses, the constant supervsion of the EU and "markets", the endless sacrifices, are being presented as "progressive".

The resignation of the people from the struggle to live with dignity and modern rights is promulgated as "progressive", in order to ensure the overpowering of capitalist economy and growth of the profits of the few.

The government of SYRIZA, playing the role of the always sinful social democracy, proved to be a valuable tool for the system. Not only it whitewashed the previous goverments of ND and PASOK, the policy of which it continued, not only it whitewashed the EU and NATO, but does everything in order to throw down the demands of the people and youth, through the notion of the minimum, with the recycling of unemployment, with the equalization of any benefits downwards, in the name of the so-called "realism" and "lesser evil".

But really modern, progressive and realistic is the struggle to get back what we lost in the years of the crisis, to abolish antipeople memorandum laws which remain in full force.

What is really progressive is the resistance to the plans of NATO, USA, EU, which accumulate flammable elements in a region with fierce economic and geopolitical competitions. It is the resistance to the policy that turns Greece into a bastion of the USA and NATO involving the people in great adventures, for the sake of the interests of Greek oligarchy. The fruit of all these, which (SYRIZA) consistently serves, was the Prespes Agreement.

Today, it is even more obvious that the reason which leads the people to poverty and unemployment is the same that puts them to be killed for the spheres of influence and the shares of the markets. That the imperialist war, which flattens countries and redraws borders, prepares day by day, within the conditions of imperialist "peace", which turns the workers' rights into ruins, so that a handful of capitalists will gain more. It is the continuation of the same policy with other, violent - mainly military - means.

What is really progressive and modern is that the evolution of science and technology, the huge existing productive potentials, is in step with the improvement of the workers' lives, with the reduction and eradication of unemployment, the constant and stable work, with the satisfaction of modern needs and not with the return to a "social middle-age" that the bourgeois parties serve.

This can be done with a new organisation of society, with social ownership in the means of production, in land, with scientific central planning of the economy, with active participation of the workers in organisation and management of social production.

With this compass we organize the modern struggles of the working class, its alliance with the other popular strata, against the attack of the capital, the continuous antipeople measures, the memorandums, against the imperialist interventions and wars. 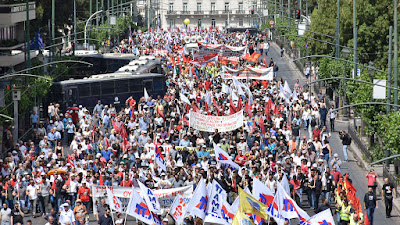 Against the governments and the parties of the capital, which try with the known fake dilemmas to entrap the people in the antipeople "one way" street...

Against the plans of NATO and capital's EU which becomes worse for the people...

Against the extreme right and fascism, which is a form of management of the dictatorship of the capital and fueled by the antipeople policies, the big interests and the tolerance shown by all the bourgeois parties...

Against those who serve this policy, whether they are in the governments, the municipalities or regions....

We can make a difference with a strong KKE everywhere, in the European elections, in the local and parliamentary elections. To send a message of optimism, militancy and solidarity to all the people of Europe.

PROLETARIANS OF ALL COUNTRIES UNITE!