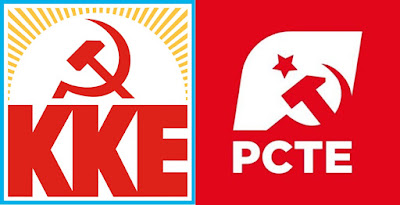 Below you can read a translated version (unofficial) of the message in English.

The KKE expresses its full solidarity with the Communist Party of the Workers of Spain ahead of the electoral battle of April 28th.

We follw the tireless efforts of your Party for the interests of the working class and the other popular strata, for the rights of Spain's youth. The PCTE contributes militantly in the organisation of the struggle against the antiworker policy of the capital, against the crushing of people's rights which will continue regardless of the party that will assume the bourgeois administration and the governmental partner. For that reason the vote to PCTE is the one that will strengthen the crucial cause of the organisation of the class struggle the following day, that will reinforce people's opposition, the assertion to the right in permanent and stable work, for free health and education, for all rights. To put obstacles in the anti-people attack and strengthen the struggle against capitalist power, for socialism.

The Communist Party of the Workers of Spain, participating in the European Communist Initiative along with 29 other Communist and Workers' Parties in Europe, contributes to the communists' struggle for the rights of the workers across Europe.

Receive, comrades, the warmest wishes of the KKE for success in the electoral battle."