"NATO must be destroyed" - Statement by the European Communist Initiative 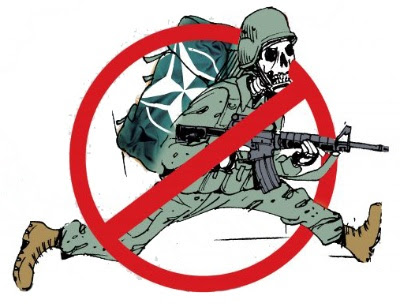 NATO was established seventy years ago, in 1949, in order to block the ideological and political influence of socialism and the Soviet Union, which had greatly increased after the Second World War, as well as its military power. As of its establishment, NATO became one of the headquarters of anti-communism and an imperialist alliance aimed to stop the rise of the working class. Their war policies of relentless military harassment threatened with direct military attacks, including nuclear ones, against the countries that were building socialism, which was answered in May 1955 with the signing of the Treaty of Friendship, Cooperation and Mutual Assistance in Warsaw.


NATO was responsible for criminal attacks against communists in its member states and was the centre of counter-guerilla organizations. It was a tool that facilitated the expansionist goals of imperialism, by manipulation and political restoration of other countries according to the interests of those on top of the hierarchy, and by creating political space to counter-revolutionary ideas.

Another disastrous outcome of its creation was the arms race, which on one side enabled a huge new market for capital accumulation for monopolies and, on the other side, meant a hard blow to socialism by capitalism, as that one was forced to allocate large resources which could have made faster improvements on life conditions for the working class and the working people.

Imperialism is stepping up the gear for its aggression in Ukraine, Balkans, Middle East, Asia, Latin America and everywhere in the World. The US uses NATO membership as a tool in order to align countries like Brazil and Colombia, where its collaborators are in power, into its policies while re-establishing its hegemony in Latin America. On the other hand, NATO enables the incitement of nationalism as a means for increasing the exploitation of the Balkan people. Also, initiatives are taken in the Middle East in order to create a block of Arabic States against Iran, creating acleavage which is at the service of the capital.

The resolution to increase the “defence expenditures” approved in the latest NATO summit is a clear imposition to all the member states to increase the budget for their war machines at the expense of making budgetary cuts from people’s basic needs. NATO is putting the future of humanity at a grave danger by fastening the nuclear arms race.

On the other hand, the crisis of imperialist-capitalist system deepens and the manifestation of this crisis can be seen in the loosening of imperialist alliances, unique quests pursued by imperialist states in Europe and the deterioration of persuasiveness of capitalism on people. PESCO agreement signed by EU member states in order to create their own war machine under the mask of “security and defence” and the frequent pronunciation of a European army is a manifestation of this crisis. However, the alternative to NATO cannot be another capitalist military alliance, another “pole” or “savior” of capitalist character, neither in Europe, nor in other regions. The only way for peace against the increasing aggression of capitalism is socialism, the brotherhood of the working classes.

NATO is a war organization which has been active for seventy years. The criminal record of these seventy years is full of lies, extortion, murders and massacres. There is only one thing to be said on its seventieth anniversary: NATO must be destroyed! Humanity shall eliminate the arch-enemy of peace and security in the World, imperialism, and its organizations like NATO, PESCO and EU. For this reason, the struggle against the counter-revolutionary organization NATO can never fall off the agenda of the communists. We, as the member communist and workers parties of the European Communist Initiative, will continue to struggle in order to shut down all military bases of NATO, kick NATO and all of its affiliates out of our countries and region. We will continue to struggle together in order to destroy this criminal organization before it causes more harm. We will continue to organize in order to establish socialism-communism.

Down With Imperialism!
Long Live Socialism!

The Secretariat of the ECI.
www.initiative-cwpe.org