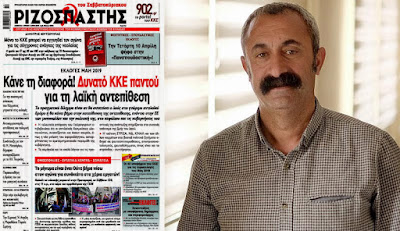 In its weekend edition (6-7 April), the KKE daily "Rizospastis" published a short interview with Fatih Mehmet Maçoğlu, the - supported by the Communist Party of Turkey (TKP)- newly elected mayor of Dersim (Tunceli Province) in the recent local elections.

Below you can read a translated version of the interview:

-The CP of Turkey participated in the recent local elections with an alliance and achieved important experiences fighting against bourgeois mechanisms. What do you think about this experience?

When we address the people, our words differ from the ones of the establishment's parties. We approach the people, we are part of them, we know their basic needs and their city. The bourgeois parties come as something "above" and try to find ways to "exploit" the city. In this sense, we, as communists who are fighting for socialism, act in accordance with the demands of the workers. We are focusing there. Secondly, we shape short-term and long-term policies based on the general situation in the country and the world. The bourgeois talk about how realists they are and how they can be saviors today. Their concern is how to improve the system of private ownership and not, of course, the people's interests.

- Tell us about how you reached the success in the municipality of Dersim. What is the potential of this success, so that more emphasis can be given to the support of people's needs?

What we said before is related to Dersim too. The first reason for our victory in the city is that the people care about the city's culture. Secondly, there is a strong ideological basis there, a social perception. And third, there is dissatisfaction about the system within the people of the city. All these leads to an organized resistance that gives advantage to the forces which fight for socialism. But here the situation was a bit more difficult related to the - smaller - municipality of Ovatsik, where I was previously the mayor. And that because we had against us not only the bourgeois parties but also supposedly friendly organizations. We concentrated democratic forces and, at the same time, we talked more about socialism, production relations, unemployment, class contradictions in a classless society. We behaved normally, we didn't talk to the people from an "above position", we are part of the people and with them. It is a political perception which is constructed in specific circumstances. It was also important to follow a common political line and coherence within the alliance.

- What message, do you think, this success sends to the working class of Turkey as a whole?

When we promote, within society, social relations that benefit the people, the other way of development, this will improve the activity and the collective work in small farmers and industrial workers. That means a wider organizational work. Organization in trade unions and cooperatives, in the places where the people can organize themselves politically. This is where our work stands. The factory workers and the farmers can work and organize together. And, finally, the contact with the means of production in industrial zones and the efforts for the mechanization of agricultural production have facilitated the organization of the working people. This is our compass. We believe that the working class can also have a say in the procedures of production and administration, for basic rights and freedoms, for the labour conditions. We see that our friends and comrades continue organizing in the cooperatives of Ovatsik which we handed over to the newly elected local administration.

- One last question. Based on the international developments it is confirmed that the capital in Turkey, Greece and across the world intensifies its imperialist aggression and the plans against the people. What do you think is the task of the communists and their allies for the organization and awakening of the working people?

For decades, the communists had problems because they couldn't apply their words in a practical way. In fact, the communists say very speicific things. What do they say? There is poverty, give rights to the poor. There are oppressed people; they must not be oppressed. They say that there are classes, one above and one below. This must end, so no classes must exist. All these are reasonable. Therefore, when there is so much wealth, it is absurd that those who produce it cannot benefit from it. Of the 8 billion people in the world, the 54% of  the wealth is in the hands of a 9%. Now tell me, can the world be governed properly when the bourgeoisie squeezes the people up to the meadows? No, and that is why they are spreading dissent among the people, the society, with wars, lies and intrigues.