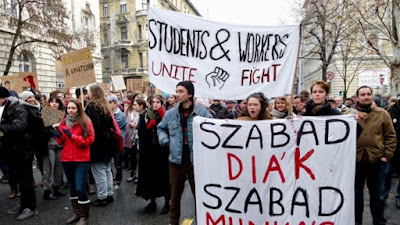 Regarding the situation in Hungary, the "slave law" and the mass protests, you can read more in the report of the Hungarian Worker's Party (Munkáspárt).


In a statement, the World Federation of Trade Unions (WFTU), which represents more than 95 million workers in 130 countries, expresses solidarity with the working class of Hungary. More specifically, the WFTU "unites its voice with the voices of the Hungarian workers in their struggle against the recent legislative initiative issued by Orban’s nationalist government that allows employers to force employees to work more overtime."
The statement of the WFTU points out that "the protesters have justly named this law “slave law” as it permits the employers to ask for 400 overtime work per year, which adds two extra hours to an average work day, or the equivalent of an extra workday per week.
We call the working class of Hungary to intensify their struggle against anti-labour measures of the government ordered by the capitalists. The protection and the expansion of the workers’ rights  is a matter that concerns the working class and the international class oriented trade union movement stands firmly on the side of  Hungarian workers."

From its side, the All Workers Militant Front (PAME), a member of the World Federation of Trade Unions,WFTU, which represents the class trade union movement of Greece, expresses its solidarity with the just protests of the workers of Hungary.
Trade unions in Hungary are holding mobilizations against the «slave-law» brought by the Orban government. According to this law, allowable hours for overtime are increased, the time for the employer to settle the paument of accrued overtime is extended, as well as the collective bargaining with unions is bypassed. In addition, they plan to extend the flexible forms of work.
Against the anti-workers policies of the governments that serve the Capital, PAME supports the workers’ struggle in Hungary and expresses its class solidarity.
IN DEFENSE OF COMMUNISM ©