Anticommunist persecutions in Poland bear the stamp of the European Union 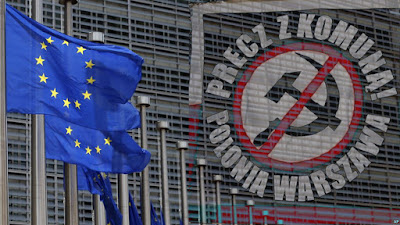 In a revealing response to the Communist Party of Greece MEP Kostas Papadakis, the EU Commission actually confirmed that the anticommunist campaign in Poland (and in other EU member-states too) bears the stamp of the Union.

Responding to a written question submitted by K. Papadakis the EU Commissioner on Justice Věra Jourová defiantly and hypocritically tried to justify the anticommunist strategy of the Polish government.


More specifically, on August 30, the KKE MEP had submitted a written question titled "New provocative operation to ban the Polish Communist Party and Communist symbols", refering to the new anticommunist "witch-hunt" initiated by the far-right government of Poland. The text of Kostas Papadakis' question (E-004432-18) was the following:

At the request of the Ministry of Justice, a working group of the Polish Parliament has proposed a change in the criminal law (Article 256 (2) of the Penal Code) in order to ban Communist symbols by putting them on a par with ‘fascist symbols’ — an unacceptable violation of the historical truth.

It should be noted that this Article was amended in 2009, with the introduction of a corresponding ban on communist symbols, but this law was invalidated in 2011 as unconstitutional.

This development comes at a time when the Constitutional Court of Poland (controlled by the Polish government) is due to ‘investigate’ the question of the legality of the existence of the Communist Party of Poland following a request by a specific reactionary organisation.

This coordinated operation by the Polish Government to outlaw the Polish Communist Party and communist symbols is part of the growing anti-communist campaign of the EU.

It reveals a common desire to hinder the organised struggle against the system of capitalist profit-seeking served by both the EU and its governments and to erase the achievements of socialism from workers' memories.

In view of the above, will the Commission state its views on:

—the new operation to ban Communist symbols and the Communist Party of Poland?

—the fact that similar developments can be observed in a number of other EU Member States?

The response to the question submitted by the KKE MEP was given by Věra Jourová on behalf of the EU Commission and it's quite revealing. Here is the answer (ref E-004432/2018) provided on November 27th:

Freedom of expression and freedom of assembly as enshrined in Articles 11 and 12 of the EU Charter of Fundamental Rights are fundamental rights the EU is based upon. Within the limits of its competences, the Commission endeavours to ensure that these rights are respected. Nonetheless, the Commission has no general powers to intervene with the Member States in the area of fundamental rights and recalls that, according to Article 51(1) of the Charter, the provisions of the Charter are addressed to the Member States only when they are implementing Union law.

As stated in the Commission report to the European Parliament and the Council on the memory of the crimes committed by totalitarian regimes in Europe, the Commission is aware that some Member States have certain legislation in place to ban the use of symbols of the communist past.

The Commission within its competences has always been strongly committed to ensuring the respect of the victims and the memory of the crimes committed by totalitarian regimes(1). Each Member State has found its own approach to remember its history. The Europe for Citizens programme supports activities on causes of totalitarian regimes and commemorating their victims.

(1)Report from the Commission to the European Parliament and the Council on the memory of the crimes committed by totalitarian regimes in Europe COM(2010) 783 final.

It must be noted that on December 7th, members and cadres of the Communist Party of Poland will once again be tried for- supposedly- "publicly promoting a totalitarian system" through "Brzask" newspaper and kompol.org website. The anticommunist frenzy in Poland never stops.


On December 3, 2018, the Communist Party of Greece (KKE) and its youth wing KNE will organize a protest at the Polish embassy in Athens demanding from the authorities of Poland to immediately end the anticommunist persecutions.

Hands Off the Polish Communists! Hands off the Communist and Antifascist monuments!