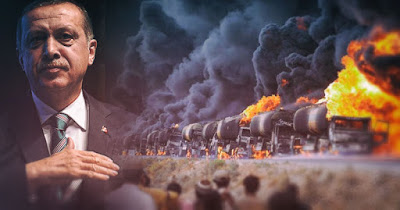 The award came after the IPA officials visited the refugee camps in Turkey. Announcing the IPA decision, Kerem Hasanoğlu, the head of the association’s external relations department, said that the association decided to award Erdoğan for his government’s role in the services regarding the refugee children.

Stating that the IPA awarded Erdogan with international peace prize for his contribution to the children’s right to life, Hasanoğlu thanked to Erdogan in the name of the world’s biggest child health institution.

Founded in 1910, the IPA is a non-governmental organization with a membership of 145 national pediatric societies from 140 countries around the world.

REFUGEE CHILDREN IN TURKEY: LABOUR EXPLOITATION, NO ACCESS TO EDUCATION

Turkey is the world’s largest host of Syrian refugees, accepting millions of people who have fled the conflict since 2011. According to Turkey’s Interior Ministry Migration Directorate, the number of recorded Syrian refugees around the country is approximately 3,5 million, apart from those unrecorded ones, nearly 1,6 million of them is below the age of 18.

Erdogan’s Justice and Development Party (AKP) played a direct role in the devastating attack targeting the Syrian government and Syrian people as an imperialist project led by the U.S., some other Western countries and the Gulf countries. Sharing a very long border with Syria, Turkey became one of the biggest terror hubs for the jihadist Islamist organizations that used the Turkish territory with an overt logistic, military and financial support from the AKP government. As Erdogan’s government has used the “open door” policy towards Syrian refugees as a populist political instrument, most of the refugees are employed, mostly unofficially, as a cheap labour force.

Research shows that in 2017 almost a half of the Syrian children had no access to education while thousands of them fell into the hands of illegal schools controlled by the Turkey-backed ‘Free Syrian Army’ and other jihadist groups.

Many other thousands of Syrian children under 18 are forced to work around Turkey. Some famous worldwide brands such as Zara, Mango and Marks&Spencer employ Syrian refugee children in their supply chains in Turkey.

A study in 2017 on the conditions of Syrian children in the southeastern city of Antakya, near the Syrian border, once again revealed the extent of child exploitation in Turkey. Half the children receive less than around $14 a week, the lowest earning around $6, while even the highest being only around $34.