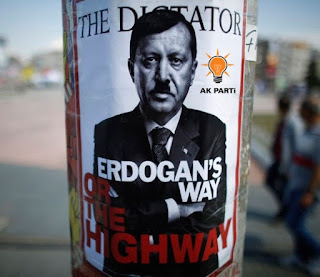 Another violent attack against communists has been occurred in Turkey, as soL international reports, with members of Erdogan's ruling AK Party attacking members of the Communist Youth who were distributing anti-imperialist leaftlets in Istanbul.

More specifically, two members of the ruling Justice and Development Party (AKP) attacked on March 27 the members of the Communist Youth of Turkey (TKG) who distributed anti-imperialist and anti-NATO leaflets in Istanbul’s Sarıyer district.

The Communist Youth members, affiliated with the Communist Party of Turkey (TKP), were distributing leaflets, reading, 'Those who don't target imperialism cannot defeat imperialists' in front of a high school in Istanbul. Meanwhile, hanging a banner of the ruling party, two unidentified members from the AKP attacked the communists.


"Just wait here, we have called the police," the attackers said, blocking the TKG members with a car. However, the assaulters tried to gather some other pro-government militants to attack the communist youth.

"You are not the people," the AKP members said and attempted to physically assault the anti-imperialist communists as the attackers were repelled with the support of the people around.

The Communist Youth is organizing a widespread anti-imperialist and anti-NATO work around Turkey despite the attacks of police and fascist forces. Revealing the hypocritical stance of the ruling AKP party, the communists call on the people to struggle for shutting the NATO and US bases in the country. Many members of the TKG have faced detentions and assaults at universities while organizing anti-imperialist events and distributing leaflets.