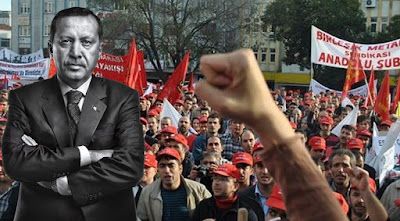 While President Tayyip Erdogan and members of his AKP government escalate the dangerous and provocative ultra-nationalist rhetoric on foreign affairs, inside Turkey the working people are facing an increasing attack on their rights.

Despite the governmental proclamations about Turkey's "economic development", the workers and popular strata of the country are struggling hard for decent employment, stable wages and labor with rights.

The news portal soL international has lately published some developments which are indicative of what is taking place in workers' daily struggle in Turkey.


In  the northwestern city of Çanakkale, 450 workers in a factory owned by Kale Group got fired for becoming union members.

In the Kaleseramik factory, where workers had been working without any unions for 17 years, the management had cut down the wages, lifted the premiums, and shortened the meal breaks as oppression and mobbing in the workplace became unbearable.

Workers therefore chose to get organised against the poor working conditions in the factory, which employs some three thousand workers. Over one thousand workers quickly becoming members of the Çimse-İş Union raised the concerns of the factory management because more than half of the workers becoming unionised would mean the union to be granted right of representation in a collective agreement.

Accessing the list of union workers via e-government services, the management dismissed 450 workers without compensation in one week on groundless charges such as “showing the payroll” and “behaving immorally”.

Furthermore, the unfired union workers are reportedly being forced to resign from union membership. The fired workers have stated that they gave the factory a week’s notice or they will take legal action.

Çanakkale Provincial Organisation of the Communist Party of Turkey’s has declared in a statement that it will stand by the dismissed workers in the factory as well as all exploited labourer in the city with all its strength juridically and organisationally. The statement calls on workers to overthrow the reign of the money and to establish the country of equality and freedom. 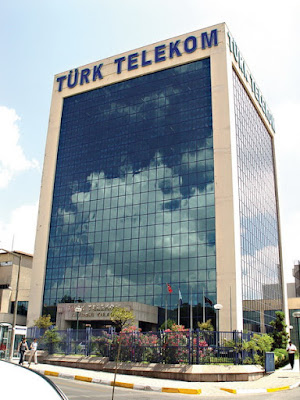 Türk Telekom has reportedly decided to dismiss 25% of its workers because of the unpaid debts of the company’s majority shareholder Oger Group.

Oger Telecom, owned in partnership by Lebanon’s Hariri family and Saudi Telecom Company (STC), had bought a 55% stake in Turkey’s national telco operator Türk Telekom for $6.5 billion through the privatisation of the Turkish state’s shares in 2005 as part of the AKP government’s privatisation policy.

Oger Group has failed to make the scheduled payment on the loan, totalling $4.75 billion, which it took out in order to refinance outstanding debts for the purchase of Türk Telekom. As per a recent Cumhuriyet report, the company’s financial crisis has deepened and the workers have to pick up the cost once again.

Ömürhan Soysal, chair of the Ankara branch of Turkey’s Chamber of Electrical Engineers, announced that Türk Telekom’s Board of Directors had recently decided to reduce the number of employees. “These dismissals will be reportedly based on the justification of ‘low performance’ which isn’t grounded on any objective criteria,” said Sosyal, specifying that 25% of the staff will be laid off.

Soysal stated that the dismissals would reportedly apply to troubleshooting teams too and it had been brought forward to scale teams down to one person each.

Adding that the experienced personnel qualifying for a pension are on the top of the dismissal list, Soysal said, “Removing the experienced personnel and recruiting new employees to their positions is an obvious sign for the pursuit of cheap labour. Although the pursuit of cheap labour employment seems profitable in short term, it means a big vulnerability in the medium and long term for both Türk Telekom and our country.”

The privatisation of Türk Telekom in 2005 had marked Turkey’s largest single sell-off realised in Turkey’s privatisation history. However, the telco giant was sold for a bargain price of $6.5 billion despite the estimated auction cost being $11.85 billion, which casted a big doubt on the sale.

Moreover, after the controversial transfer of the company, Oger Group chose to pay to the Turkish state through putting the Turk Telekom shares in pledge though it wasn’t formally entitled to use the company’s shares as loan collateral. In the meantime, it paid no heed to pay its debts back to banks.

On the other hand, although both senior officials from Oger Group and then Prime Minister Tayyip Erdoğan had announced that no workers would be fired from the company, this promise wasn’t kept following the privatisation. According to a report in 2011, over 35 thousand employees had been discharged by Oger Telecom and the number of employees saw a 55% decrease. Thousands of people rallied on March 25 against Turkish government's decision to privatise sugar factories. During the protest organised by Trakya Sugar Platform, the people chanted the slogans "Do not shut up; say no to starch-based sugar", "long live the solidarity for sugar", and "sugar factories belong to people, and so they will".

Orhan Saltık, the chairperson of Şeker-İş Union Alpullu branch, addressed to the protestors, saying that the government manipulates the data to legitimise privatisation of sugar factories. Saltık said in Alpullu sugar factory "There had been one thousand and a hundred workers in the factory. Today, 120 thousand tons of sugar beet is processed by 180 workers. How can a factory that did not lose money when there had been 1100 workers start to lose money when it employed only 180 workers?" He added that no new workers have been employed since the government implemented sugar beet cultivation quota and increased the quota of starch-based sugar 20 years ago.

Veli Ağbaba, the vice president of the main opposition party CHP, also addressed the people and highlighted that the decision of privatisation was not the people's demand, but the imposition of US-based companies like Cargill that trade starch-based sugar.

Gürcan Kırımlı, a member of provincial assembly from CHP, also noted that sugar factories are one of the building blocks of Turkish Republic, adding that starch-based sugar damages health and kills silently.

Turkey's ruling AKP government declared at the end of February that 14 sugar factories around Turkey are to be privatised since they do not make the profit. Since then, sugar factory workers are on the protest, but the government is determined to finalise privatisation process.