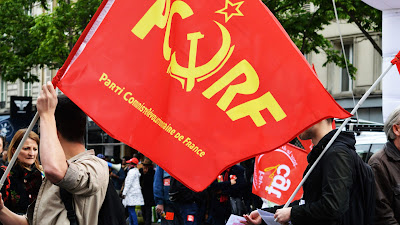 ICP: On the centenary of the Great October Socialist Revolution, it has become more and more important to understand well the necessity and role of the communist youth both in the struggle for the rights of the youth and in the working class struggle. How do you consider the potential that communist youth can reveal today in an imperialist country like France?


UJC: There is a clear potential for the Communist Youth Union (UJC) among young workers in France. This is a special situation where discontent is spread within the population and among youngsters, but which does not systematically turn into people's organisation into communist organisations and particularly into the communist youth.

This discontent is reflected in the search for doing politics "differently", because there is a distrust towards classical political formations. So, many youngsters get mobilised for social issues like refugees or gender question. In the second tour of the presidential elections, many chose not to vote or to give a blank vote (if we do not consider the non-inscribed), rather than choosing one of the two candidates (Macron / Marine le Pen). This fact given, the current candidate has not been chosen by a majority whereas inscribed individuals massively expressed their discontent, their desire for not participating in voting. Because of these reasons, we can say that there is a potential for communists.

Nevertheless, we should not overestimate the situation. We have expressed it above: there is no reflection of this discontent into people's systematic organisation. A big part of the youth is taken by the bourgeois ideology via media, education and mass consumption (video games, cinema, etc.), hence the provoked fear among all working people (of losing their job, for example). On the other hand, for the youth which gets mobilised for social issues, we state that there is no class direction but ideas belonging to gauchisme or reformism.
There is a great work to be done, because this potential can be exploited only through a political, economic and ideological struggle. We have to struggle against bourgeoisie who dominates people and maintains them in conformism, but also against gauchisme and reformism which diffuse dangerous ideas among the youth and which can pave the way for youngsters' capitalist integration.

ICP: On these days, "state of emergency" seems like a very useful implementation for governments in order to liquidate the discontents of political crises and on the other hand to create favourable conditions for better serving capitalists with more and more offensive tentatives. How do you explain from a class perspective the course of capitalism in France, which is passing through a particular period starting from the state of emergency and continuing with the presidency of Emmanuel Macron?

UJC: Here we see imperialism's face. There is a strengthening both inside and outside: state of emergency serves principally against the working class, while imperialism provokes abroad wars and deaths.

These all serve bourgeois's profits. We saw that state of emergency, even permanently, is not efficient against terrorist attacks. It is, on the contrary, efficient for imprisoning trade-unionists and legitimising bourgeoisie's general attack against social gains of the working people. Reformist organisations supported the first vote for state of emergency day after the attacks of November 2015 and then voted for Emmanuel Macron in the second tour of the 2017 presidential elections. How can we still affirm that state of emergency serves the protection of the working people against terrorists, while it is a tool for strengthening the bourgeois domination through its state apparatus.

ICP: We observe that following the capitalist crisis there has been an upsurge for fascist movements in Europe and in the World. France is one of the countries where fascism more and more seriously is becoming a threat. So, what can you say about fascist movements' stage of organisation within the youth? How and with which instruments do these criminal organisations wage their activities among the youth?

UJC: These organisations have too much influence, even if they are limited in little groups. Two groups are principally known in France: the Group Defense Union (GUD) and the French Action (AF). The GUD uses a revolutionary anti-capitalist discourse but is fascist and serves the revolted youngsters' integration into capitalism. The AF is especially a petit-bourgeois organisation with a royalist bourgeois ideology, which wants to restore kingdom in France without putting capitalism into question. These two organisations, as well as others in France, use community action (GUD) and collective identity around an individual (AF). They may seduce certain youngsters with their acts, notably through aids for the poor, through Christian charity or a false anti-capitalism, but their acts will always be demagogical and in the service of their ultra-reactionary and fascist cause.

There are also several people who have influence, especially in social media. They know how to exploit the anger of many youngsters by using "trash" humour, cynism and irony which reveal in reality their thoughts and reactionary ideology. We can speak about Alain Soral ("Equality and Reconciliation" group) or "Raptor Dissident" for instance. They are obviously sexist, homophobe and anti-semitic. They know how to use leftist phrases for presenting themselves as anti-conformist and anti-systemic.

But which system? Certainly not capitalism. In fact, this belongs to the extreme-right and to the pro-fascist circles: they use a contending language only in an abstract political form, without precising what stands under the system oppressing us and creating the political scandals that they denounce. Because of lacking serious scientific analyses, they can talk about complots against the French, and make junction with all complotist theories which exist on internet but are nothing but products of human stupidity.

We have to remind that even if they are organisationally in a level of little groups, these ultra-reactionary and fascist groups may be one day a tool for the bourgeoisie to implement a fascist terrorist power against the working people. These organisations may serve as militias. Today, these organisations serve to divide the working class and the youth, they divert the discontent against abstractions, but also against our communist organisations. This is why we have to fight and struggle for the overthrow of the capitalist system, which produced them.

ICP: School fees, accommodation issue, access to public services, loss of social rights and the growing interest in decadent habits are among numerous problems faced by the youth. For communists, this diversity calls for integral and coherent position and strategy. Still, France stands on a well-enrooted tradition of political struggle. How do you elaborate your works for the mobilisation of the youth and the working class?

UJC: UJC develops her policies among the youth through 6 axes of struggle: work, education, health, accommodation, transportation and entertainment (sports, culture, hobbies). These axes are transitive towards socialism. They let us show on the one hand that bourgeoisie does not devote enough means for these fields which are essential in youngsters' lives. On the other hand, these axes let us treat the issue of socialism, since we would fully respond to these questions in a socialist system.

But these axes should not rest in a cadre of agit-prop. The necessity of socialism for youngsters can be understood with a political perspective of breaking with capitalism and its crisis, and furthermore with advances via social gains. It is about articulating tactic and strategy. We do not want to reform the system, but to show the limits and that it is possible to construct another society. That is why we work for concretising these axes with our immediate propositions by helping the emergence of socialist consciousness within the youth. This must take place 1) with a mass work and mass intervention in neighbourhoods, entreprises and education centres; 2) with the organisation of youngsters in trade-union organisations or associations; 3) with the organisation of youngsters in the UJC and the Revolutionary Communist Party of France (PCRF).

UJC: This current had a strong influence in France. It is one of the countries where revisionism and class treason through social-democratic way are the strongest in Europe and maybe all world. Accompanied by a fact such as French imperialism, it may be the strongest in Europe and all world. This makes difficult the struggle against reformist illusions among the youth and for the emergence of a veritable revolutionary consciousness. Euro-communism played a role in the depoliticisation of the youngsters: bureaucratic apparatus and political choices against the interests of the working class have disgusted many people. Some turn towards anarchism (and its modern "autonomy" form), others abandon political organisation and lose their confidence in any other organisation, including revolutionary ones. This is why our struggle against social-democracy and opportunism also has to be an essential fight in our revolutionary struggle.

ICP: What is your position concerning the concept of "struggle against islamophobia for multi-cultural (pluralist) society" which is derived from the theory of "clash of civilisations"? As to European left, we see that there is a general consensus on this liberal approach. Do you find this approach efficient in the struggle against fascism? 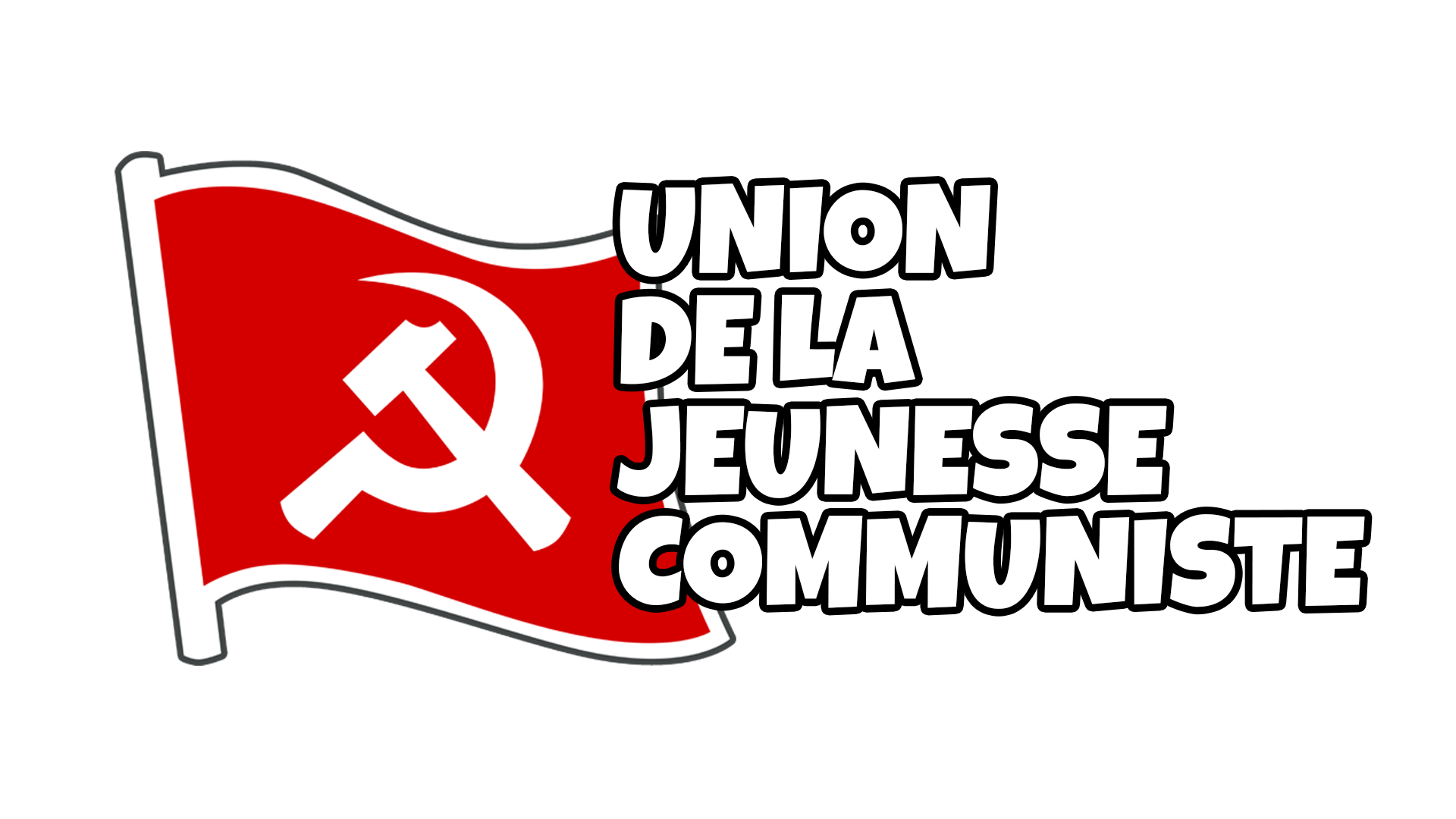 UJC: Struggle against fascism through cultural or religious approaches is not efficient. We would even say that these approaches cannot be a nucleus for political action in general. In fact, how to justify these approaches without a moral and abstract point of view? Which are the criteria to justify that racism is not right?

Political struggle does not stand on principles of identity. We, communists, do not fight for an abstract idea but for the material transformation of the society, which will then change the ideological composition among people. If there is a total incompatibility between communism and fascism, it is because the former poses the overthrow of capitalism as the nucleus of political action while the latter serves the interests of the bourgeoisie, integrates workers into capitalism for strengthening it.