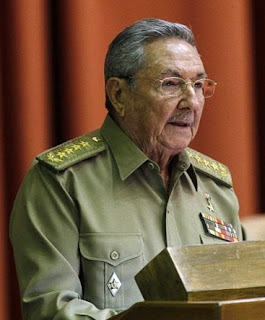 More specifically, as Telesur reports, in a broadcast on Cuban state television Saturday, President Raul Castro said Trump’s imperial castigation of the communist island as home to “cruel despotism” were "the contradictory and clumsy pronouncements of the millionaire magnate-turned-president on issues of both foreign and domestic policy."

With Saturday marking 115 years since Cuba’s victory against Spanish colonial and U.S. military rule, Trump offered his timeworn criticism against the country, saying, "The Cuban people deserve a government that peacefully defends democratic values, economic freedoms, religious freedoms and human rights. And my administration is committed to achieving that vision.”
Saying that independence marked the beginning of Cuba becoming "the Yankee neocolony” due to U.S. imperial intervention until it was defeated decades later with the victory of the Cuban Revolution on January 1, 1959, Raul Castro affirmed that Cuba will continue with its revolutionary ideals.

On May 20, 1902, Tomas Estrada Palma began his term as the first president elected by the citizens of the island, ending over three years of U.S. military rule in the wake of quashing 400 years of Spanish rule in 1898, when Cuba won a half-hearted independence as Spain ceded the island to the U.S. For decades, Washington was legally allowed to unilaterally intervene in Cuba and dominated Havana and the island's resources.
Trump’s comments came two weeks after the State Department, in its customary “soft power” warfare, said the White House would press Cuba on “human rights progress,” saying it was carrying out a "comprehensive policy review."
The United States and Cuba announced plans in December 2014 to re-establish long-frozen relations. Since then, the two countries have seen landmark reforms in U.S. policy toward Cuba and bilateral ties between the two nations.
However, Cuba maintains that the normalization of ties will not be complete until the United States lifts the financial, commercial and economic blockade against the island, closes down the U.S. military base at Guantanamo and commits to fully respecting Cuban sovereignty.
But Trump has demonstrated hostility toward Cuba and rejected the thawing of ties, claiming that the normalization process should be scrapped unless Havana agrees to a better “deal,” while Raul Castro has reaffirmed that despite the changes  the socialist country will never head toward capitalism.
IN DEFENSE OF COMMUNISM ©.