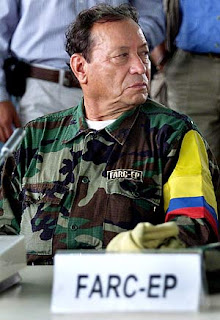 Manuel Marulanda Velez, founder of the Revolutionary Armed Forces of Colombia and its leader until his death, was a man firmly and decisively committed to the campesinos of Colombia and their liberation.
It is said that Marulanda was so thoroughly a man of the countryside that in his entire life he never set foot in the Colombian capital of Bogota.
He died of natural causes eight years ago today, March 26, 2008.


Born Pedro Antonio Marin, he adopted his new moniker in honor of one of the founders of the Colombian Communist Party.
The adoption of a fallen comrade's name is an old tradition amongst the Latin American Left. Famed Mexican revolutionary Pancho Villa took the name of a murdered colleague. Subcommandante Marcos of the Zapatistas would follow this tradition, abandoning that name in favor of Subcomandante Insurgente Galeano in 2014 after a member of the rebel group killed by paramilitaries.
Marulanda's legend predates the founding of the Revolutionary Armed Forces of Colombia - Army of the People, as the FARC is formally known.
He was also known as “Tirofijo” or “Sureshot” for his shooting acumen.
Marulanda was among those caught up in the conflict between Liberals and Conservatives known as La Violencia. He would come to be a leading figure in the “Independent Republic of Marquetalia,” a remote rural enclave under the influence of the Communist Party.
After the end of La Violencia, the government viewed Marquetalia and other so-called independent republics as a threat to the state's hegemony and sent the army to crush it.
Marulanda, along with 48 others, narrowly escaped this military operation. He would turn this small group of rebels into one of the largest and longest-lasting guerrilla armies in the world.
It was the way that Marulanda carried himself that made him such an effective organizer of campesinos. They saw themselves in him, though others in the FARC were dedicated to the ideological development of the rebel group, it was Marulanda that made it grow.
At its peak and under Marulanda's leadership the FARC counted on 20,000 fighters and controlled an estimated 40 percent of the country, primarily in the countryside, but also held considerable influence in the poor neighborhoods of Colombia's cities.
Marulanda was a veteran of two unsuccessful peace efforts between the FARC and the government. He was famously asked during negotiations in the 1980's what he would do if peace was achieved. Marulanda's answer was, “I will go back to my childhood farm in Genova, if it is still there.”
In some ways it is as a result of his loyalty to the countryside and the campesino that Marulanda is not a well-known figure, even among the Left.
Though in the capital of revolutionary Venezuela there is a plaza named after him, which also features a bust of the FARC founder, located in the historically combative working-class neighborhood of 23 de Enero.
The campesino roots of the FARC remains within the rebels today, which has emphasized during peace talks, above all else, the need for agrarian reform to benefit the campesinos.
Marulanda was so reviled by the Colombian political elite that the state on countless occasions proclaimed his death, only to be disproved later.
Manuel Marulanda finally did die on March 26, 2008, as a result of heart failure but his legacy lives on, as the song by FARC songwriter Julian Conrado, states, “Now Colombia is full of Manueles.”
From Poor Campesino to Colombia’s Most Wanted.
Source: Telesur. 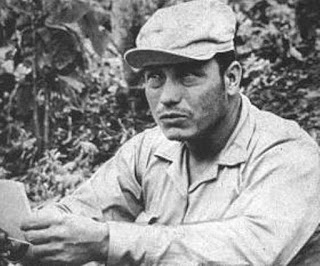 The U.S. military led a mission to Colombia in the early 1960s that warned its government that it was ill-prepared for the "communist threat" facing the country. In 1964, following the military guidelines advised by the U.S., the Colombian state launched a fierce military mission to bomb and destroy Marquetalia, a self-governing communist campesino community. Amongst those who survived the attack, where napalm bombs were used, was a young campesino leader named Pedro Antonio Marin Marin, later known by his noms de guerre, Manuel Marulanda.
The following year two French documentary makers entered Colombia and convinced the authorities to allow them to film rare birds in the Colombian mountains of the Huila department. What they actually recorded was the first film appearance of the young Marulanda — or Tirofijo, Sureshot, due to his accuracy with firearms — by then the most wanted man in the country.
Unable to defeat him and his modest but capable guerrilla group, the country’s press was used as a tool to characterize them as bandits rather than revolutionaries. Marulanda used his appearance in the French documentary to clarify to the world that the Colombian press was being used as a propaganda machine by the state and that the campesinos were, in fact, defending themselves from the violence employed against them by the military.
In spite of the government and the national media doing all they could to vilify Marulanda and his guerrilla group, he became a legend to the multitudes of poor campesinos and within left organizations in the cities. In their desperation to stop his becoming a personality like Fidel Castro or Che Guevara, he was reported as having been killed in combat several times throughout his long life, only to reappear as defiant as ever. In one of the last interviews he gave before dying of natural causes in 2008, he mockingly recounted, “It has been reported that I have been wounded several times, but even those are false.”
Once the armed campesinos began to go on the offensive against military forces and sought to take power under the name of the Revolutionary Armed Forces of Colombia in 1964, it became a tool of the state and the mainstream media to effectively characterize the insurgents as criminals, narcos and terrorists. These labels have been consistently used throughout the decades, including up to today. Notwithstanding, an investigation commissioned by Colombia’s public prosecution office in 2014 concluded that the FARC should not be labeled narcos nor terrorists.
For centuries ruling oligarchs in Latin America have attempted to portray political leaders and revolutionaries as bandits, criminals and terrorists. When Micaela Bastidas and Tupac Amaru II organized an insurgency against the Spanish colonialists, they too were treated and labeled as criminals and their dismembered bodies were exhibited around Peru as traitors.
Revolutionary leaders Pancho Villa and Emiliano Zapata were also made out as bandits looking out for their own interests by the Mexican political elite. In more recent history Fidel Castro’s characterization as a ‘violent dictator’ by the right-wing in Miami inspired them to celebrate his death. All of these historical figures were committed to achieving social justice for the oppressed masses. During their lives, each one was portrayed as an enemy of progress and the people. 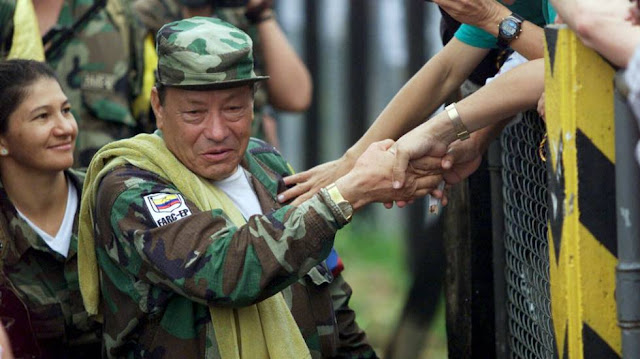 In his career as the FARC’s leader for almost half a century, Marulanda persistently sat down with different Colombian administrations in an attempt to bring about a peaceful solution to the conflict. The first major peace process started in 1982 under president Belisario Betancur and culminated with the signing of an agreement in 1984 that was supposed to guarantee the political rights of the left opposition. Out of these talks emerged the Patriotic Union, a political party founded by the FARC and the Colombian Communist Party.
What followed was the genocide of more than 5,000 of its leaders and members, in what has been described as the political extermination of an entire political party. This incredibly violent outcome from the "peace deal" undoubtedly gave Marulanda zero confidence in the promises made by the Colombian state and set the tone for all the talks that followed. Nevertheless, the present peace deal which is now being implemented is, according to the FARC, a result of Marulanda’s long struggle to achieve revolutionary peace in the country.
Paramilitary death squads, on the other hand, were designed and maintained to protect the established power of the political, capitalist and landowning elite. In fact, it was during the early years of the campesino uprisings in the 1960s that the U.S., through Colonel William Yarborough, advised the Colombian government to create and train death squads to combat the threat of communism. These groups continue to terrorize and kill campesinos and social leaders in the country.
These two armed groups are so antithetical to each other, that with the demobilization of the FARC there have been increasing reports of paramilitary repression and murder of campesinos who have been left exposed by the void left by the guerrilla forces.
Manuel Marulanda was neither the cause nor the aggressor in the more than 50-year war that has plagued Colombia. He was part of the response of the oppressed campesinos against a government that has always insisted in prioritizing capitalist and imperialist interests above those of its people. The "Warrior of Peace," as he is known to radicals in Latin America, has left a legacy that may indeed be smeared by mainstream media, but that continues to inspire revolutionary change in Colombia and the entire region.
His more than 50 years of struggle in the mountains and jungles of Colombia have greatly influenced the peace accords and its trajectory that puts forward a radical proposal for change with social justice and participation that would not have been possible if Manuel Marulanda had not devoted his life to the Colombian people.
IN DEFENSE OF COMMUNISM ©.