People Rise Up: Greece's Labour movement prepares for national General Strike on May 17 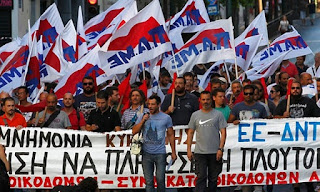 A nationwide General Strike is scheduled to take place on May 17, 2017 with rallies and demonstrations in Athens-Piraeus, Thessaloniki, Patras and all major cities of the country.
On the occasion of the General Strike, the All-Workers Militant Front (PAME) calls the people to rise up against the new harsh measures imposed by the bailout agreement of the SYRIZA coalition government and the creditors (EU-IMF). More specifically, the PAME statement writes:


All together, workers, Unemployed, self-employed, scientists, small farmers, young workers, we must stop the continuous destruction of our lives.
We must demand the recovery of all our losses
We must fight for new demands, based on our contemporary needs
The new Agreement-4th Memorandum of the SYRIZA Government-Capital-EU is:

We can see clearly what is the meaning of the so called “fair development”. It is growth and development for the benefit of the capitalists, that is built over the destruction of the workers’-people’s rights. Development based on extreme exploitation. Growth which means huge profits for the few, poverty for the many.
For these profits the SYRIZA Government, also, promotes the participation of Greece to the geopolitical bloodbath that we witness in our region. Their goal of “geostrategic upgrade” of Greece is why they participate in the imperialist interventions and wars.
We demand no participation in the imperialist plans
The workers, the unemployed, the young workers, we demand the recovery of our losses, our contemporary needs.
We condemn the unified line of the political parties (social democratic, liberal, centrist, etc) that supported the 3rd Memorandum., who support the policy of the monopolies and the exploitative system. They are responsible for our situation.
We take the responsibility for the organizations and success of the General Strike in our hands.
We overcome the obstacles and the undermining of the forces of class collaboration, the trade union forces controlled by the Government and the employers. We overcome the ETUC members in Greece (GSEE-ADEDY), who are the most stable ally of the capitalists.
We have the right on our side!
We have the power!
May 17 - National General Strike
May 18 Demonstrations and Rallies in All Greek Cities.
ATHENS, Kotzia square at 10.00 am.
THESSALONIKI, Venizelos' statue at 10.30 am.
PIRAEUS, Karaiskaki square at 10.00 am.