The great day of victory over Germany has arrived. Fascist Germany, forced to her knees by the Red Army and the troops of our Allies, has admitted defeat and has announced her unconditional surrender.

Knowing the wolfish habits of the German rulers who regard treaties and agreements as scraps of paper, we have no grounds for accepting their word. Nevertheless, this morning, the German troops, in conformity with the act of surrender, began en masse to lay down their arms and surrender to our troops. This is not a scrap of paper. It is the actual capitulation of the armed forces of Germany. True, one group of German troops in the region of Czechoslovakia still refuses to surrender, but I hope the Red Army will succeed in bringing it to its senses.

We now have full grounds for saying that the historic
day of the final defeat of Germany, the day of our people's great victory over German imperialism, has arrived.

The great sacrifices we have made for the freedom and independence of our country, the incalculable privation and suffering our people have endured during the war, our intense labours in the rear and at the front, laid at the altar of our motherland, have not been in vain; they have been crowned by complete victory over the enemy. The ago-long struggle of the Slavonic peoples for their existence and independence has ended in victory over the German aggressors and German tyranny.

Henceforth, the great banner of the freedom of the peoples and peace between the peoples will fly over Europe. 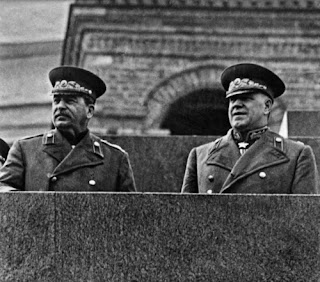 Three years ago Hitler publicly stated that his task included the dismemberment of the Soviet Union and the severance from it of the Caucasus, the Ukraine, Byelorussia, the Baltic and other regions. He definitely said: "We shall destroy Russia so that she shall never be able to rise again." This was three years ago. But Hitler's insane ideas were fated to remain unrealized -- the course of the war scattered them to the winds like dust. Actually, the very opposite of what the Hitlerites dreamed of in their delirium occurred. Germany is utterly defeated. The German troops are surrendering. The Soviet Union is triumphant, although it has no intention of either dismembering or destroying Germany.

Comrades! Our Great Patriotic War has terminated in our complete victory. The period of war in Europe has closed. A period of peaceful development has been ushered in.

Congratulations on our victory, my dear fellow countrymen and countrywomen!

Glory to our heroic Red Army, which upheld the independence of our country and achieved victory over the enemy!

Glory to our great people, the people victorious!
Eternal glory to the heroes who fell fighting the enemy and who gave their lives for the freedom and happiness of our people!