Open letter by the Communist Party of Venezuela: Defeat the Coup Against the Bolivarian Republic 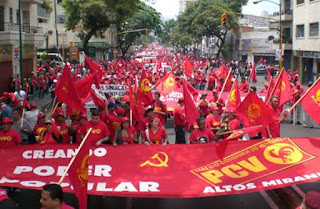 An open letter to the people, from the Communist Party of Venezuela (PCV).

To our compatriot Nicolas Maduro, President of the Republic; to the working class and working people of the city and countryside; to the patriotic officers, classes, and soldiers of the National Bolivarian Armed Forces; to the national leadership and militancy of the political parties and popular organisations of the Great Patriotic Pole, including the United Socialist Party.

The Bolivarian Republic of Venezuela finds itself threatened yet again by acts of political violence from sectors of the extreme right as part of the execution of a destabilising plan elaborated by North American imperialism.


This plan has as its objective the imposition through force and blackmail of a government which would work to maintain US hegemony throughout the continent, taking apart the processes of national liberation which begun across Latin America at the start of this century, and turning back progressive advances which have allowed the working class and the people in general to establish rights and social advances which were historically denied them by governments which responded absolutely to the interests of the bourgeoisie, which in itself acted as a subordinate to North American imperialism.

On this occasion the aggressive escalation against our people by those actors of the oligarchy and extreme right is much greater.

Apart from the anti-popular violent acts resulting in the creation of shortages and the high cost of living, terrorist acts have been seen in various cities across the country in recent weeks.

These acts have been accompanied by a national and international propaganda war which looks to sew confusion and instigate confrontation between nations, creating a state of chaos and violence which only favours a bloody resolution of the political crisis, be it through a coup or a direct intervention by North American imperialism and the international institutions at its beck and call.
The Venezuelan extreme right, following instructions from US imperialism and with its direct financing, does not control itself in its crimes of violence and provocation.

With such objectives in mind, the pro-US right are pressuring military officers with diverse forces of blackmail and manipulation.

We call on the patriotic soldiers and officers to not cede to these unpatriotic terrorists and to take up the cause of the defence of our national sovereignty and our independence and the security of our people without hesitation and with complete commitment.

For us, the Venezuelan communists, it is clear that what is happening is the sharpening of the class struggle in its political form — the heightening of the struggle for power. The forces which represent the interests of European and North American great monopoly capital are attempting to take over control of Venezuela and all Latin America by defeating and vanquishing the social and political sectors which offer resistance to such objectives.

In light of the dangerous terrorist escalation, which is putting our national sovereignty, independence, and the gains of the working people at risk, we call for a unified, forceful, and coherent response. It is necessary to mobilise without delay the widest possible anti-imperialist alliance to defeat the anti-democratic terrorist plans.

We urgently need the central government, the parties of the Great Patriotic Pole, the forces of the popular and working-class movement, and the patriotic command of the armed forces to work together.

It is necessary to develop a popular and patriotic plan to defeat the pro-imperialist and terrorist extreme right. To not do so would be to act with irresponsibility and, in reality, to hand oneself over without a fight.
The true revolutionaries do not hand ourselves over, we fight united until we succeed.

The Venezuelan working class needs that the sectors of the petit-bourgeoisie which currently hold hegemonic power in the national executive, the other powers of state and parties of government, immediately abandon all sectarian and selfish conduct which has only weakened the Bolivarian process and effectively works in favour of the enemies’ plans.

The Communist Party of Venezuela has insisted for many years for the need for a collective and unified national leadership of this Bolivarian process of changes, but the petit-bourgeoisie groupings which have exercised hegemonic control over the government have not paid attention to these calls and proposals. Hence, in the current context we insist on unity of action of all the political and social forces willing to defend the nation against the imperialist enemy and their puppets.

However also, in the context of a wavering and inconsequent petit-bourgeoisie in power, we call upon the most conscientious and combative sectors of the popular and workers’ movements, the peasantry, the middle strata, the revolutionary intellectuals and the patriotic officers to forge a block of forces which will lead the wide patriotic and anti-imperialist alliance so as to halt the seditious plans of the pro-US right and also so as to displace the reformist-appeasement sectors which, from positions of government, tend to favour the sectors of the big bourgeoisie and form pacts with social democratic elements of the right wing.

Only an ample, popular unity, led by the organised and conscientious working class can guarantee the defence of the Bolivarian nation and the deepening of the revolutionary changes towards the real construction of socialism on scientific and committed foundations.

Peace is won by defeating fascism.