Three years of Narendra Modi's government: The devastating situation of women in India Source: Communist Party of India (Marxist).
Three years of Modi Raj. How has it been for the women of this country?
In one word: devastating. Budget spending on women related programs has been cut, employment opportunities for women are nowhere in sight, unbridled violence against women continues and on top of everything, we have scores of RSS-inspired leaders who are openly preaching a return to medieval times with women locked inside domestic walls, wearing “proper” clothes and behaving respectfully towards men.
No surprise that the promise of passing the Women’s Reservation Bill is not even on the govt.’s agenda.


Cuts in govt. spending on women
For the past 2 years we have seen significant cuts in the gender budget, and this year also the pattern continues. When Finance Minister, Arun Jaitely, presented the budget it was called a budget for women by Ministry for Women and Child Development. But what do the numbers say?
This year’s budget was a disappointment in terms of gender budget. There are many schemes and programmes which don’t have separate allocations for women. Dairy and fishery are two industries that provide employment to a large number of women and yet their budget has no separate allocation for women. Same goes for the various agricultural schemes.
The only food related programme which has a separate allocation for women is National Food Security Scheme which saw a meagre increase of Rs. 60 crore.
According to the Economic Survey 2016-17, Mahatma Gandhi National Rural Employment Guarantee Scheme has 57% participation of women workers. Finance Minister claims to have increased the scheme’s budget by 26%, from Rs. 38,500 crores in 2016-17 to Rs. 48,000 crores in 2017-18. But the revised estimate of 2016-17 for the scheme was Rs. 47,499 crores, which makes the increase in this year’s budget just 1%. We know how Modi government likes to forge numbers but take a closer look and you can easily call their bluff. We regularly see reports about the non-payment of wages under MGNREGS. These workers are amongst the poorest of our country, their wages are a matter of survival for them. Did the Finance Minister think a puny increase of 1% will solve the crisis of non-payments this scheme is facing?
Integrated Child Development Scheme employs only women and caters to the nutritional needs of 0-6 year old children. Minister for Women and Child Development, Maneka Gandhi, informed the Rajya Sabha in May, 2015 that there are 24.58 lakh women employed under the scheme. These women are not considered workers and in lieu of their services are given a meagre amount of money as honorarium. Anganwadi workers have been demanding for years that they are brought under the definition of workers. But like the preceding Congress government, Modi government too has been ignoring their just demands. These workers don’t get their paltry honorarium regularly. In the financial year 2015-16, according to WCD ministry, the scheme endured 50% budget cut. Similarly, in financial year 2016-17, the scheme’s budget was cut by another 6%. In this year’s budget, it saw a minimal increase of Rs. 34.79 crores, from Rs. 411.68 crores in revised estimate (2016-17) to Rs. 446.47 crores. This “increase” will not be able to cater to the needs of this extremely important scheme.
On New Year’s Eve, PM Modi claimed to launch a new scheme for pregnant women of the country called maternity benefits programme. In reality, it was just expansion of an already existing scheme. Indira Gandhi Matritva Sahyog Yojana (IGMSY) was introduced in 2010 and in 2013 was brought under National Food Security Act. On 17th May 2017, the cabinet decided to limit the scheme to only firstborns as opposed to earlier when it was for first two live births. This excludes a large number of women from the scheme. In violation of the NFSA, the government has also decided to provide only Rs.5000 to the mothers instead of Rs.6000. Also, this benefit will be linked to Aadhar cards, which will leave out thousands of women. The Modi government has allocated only Rs 2700 crore for this in 2017. This will cover only 17 percent of the 2.6 crore live childbirths per year in India. It is evident that the centre government is trying to rid of its responsibilities toward women of the country by such moves. 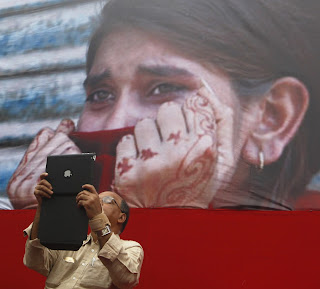 No work for women
A report by the Labour Bureau published in 2016 revealed that just 22% of women over the age of 15 were working on a regular basis, compared to 74% men in the same age group. In urban areas, the working women’s share slips to a mere 14%. This shocking state of affairs, which puts India at rank 136 out of 145 countries for gender parity in work, is not new: it has continued like this for many years. But Modi govt is completely blind to this. No policy has been announced to encourage more job opportunities for women, no special measures for preparing women to take up jobs has been thought of, technical training for women still focuses on beautician and tailoring courses and there is no attempt to address safety and security issues for women in workplaces.
Wage differentials between men and women doing the same work continue as before, maternity leave and other benefits are not available to the bulk of working women and special provisions like creches at workplaces are rarely found even in ultra-modern industries, forget about the smaller units.
As a result, women’s unemployment was pegged at 8.7%, more than double that for men, according to the report. This is of course based on reporting by women who said they wanted to work but couldn’t find it. The vast majority of women are simply confined to their homes with no hope for working, even in dire circumstances, because of the stranglehold of patriarchal thought on families. Modi, and the Sangh parivar are not in the least bothered by this at it fits in with their ideology completely. In 2015, WCD minister, Maneka Gandhi, made a request to Finance and Corporate Affairs minister, Arun Jaitely, to make it mandatory for companies to disclose whether they have constituted an anti-sexual harassment committee. Arun Jaitely rejected the request stating that industry representatives are against this type of enhanced disclosure and this is not desirable. This shows that as long as the industries are happy it is absolutely fine to ignore Vishaka guidelines which directs the offices where women work to have in place an anti-sexual harassment committee.
Hindutva inspired approach to women
It may be easier to rectify the errors in policies and implementations of schemes. But what the Modi government and its motherboard RSS is trying to do with the fabric and structure of our society will be extremely difficult to undo. They are propagating the anti-women agenda intensively and it is evident in the comments and statements their ministers, BJP leaders and RSS members make regularly.
This year in March, minister for Women and Child Development, Maneka Gandhi, made a statement which brought her under fire. She has said on record that there should be an earlier curfew for women in their hostels for their own protection. She went on to say that a 16-17 year old girl is ‘hormonally challenged’. Hence, a lakshmanrekha is drawn to control the ‘hormonal outburst’. According to her “logic” women are responsible for their own safety and to ensure it, they should just remain in confines. Young adult females’ hormonal equilibrium is too fragile to let them out in society. She justifies the patriarchal norm of keeping women locked away in order to “protect” them.
The appointment of Yogi Adityanath as chief minister of Uttar Pradesh, shows that the government is dead set to push the hindutva agenda which is devastating for women. This is the same person who had said in a speech that dead bodies of Muslim women should be dug out of their graves and be raped to avenge the so called “Love Jihad”. A person who thinks that raping a women, dead or alive, is acceptable is now the Chief Minister of the largest state in the country. This is the ideology that the RSS and their political extension BJP upholds.
Immediately, after becoming the CM of Uttar Pradesh, Yogi Adityanath, ordered the police to form ‘anti-Romeo squads’ to curb incidents of eve teasing. But media reports show, that this squad has primarily targeted couples, often beating them up, as recorded on videos available on social media. This is not an attempt to protect women from harassment but a thinly veiled plan to prevent inter-caste and inter-religion marriages. This again is an attack on a women’s right to choose their partner. Similarly the BJP leader, Manohar Lal Khattar, had said that women are the reason behind rising incidents of rape in India. He is now the Chief Minister of Haryana since the last three years.
Violence against women
Violence against women in its myriad forms continues unabated under Modi’s rule, despite much chest thumping by diverse BJP leaders about protecting “our mothers and sisters”. Police records, which reflect only the tip of the iceberg, show an uptick in 2015 over 2013 for rape, attempt to rape, kidnapping and abduction, assaults, and domestic violence among others. Strangely, the bunch of penal provisions related to dowry exhibit a dip. This may be because the Sangh parivar and BJP has always been wishy washy about opposing the heinous practice of dowry and its barbaric product, dowry deaths, probably resulting in a lower registration of cases by the police. In all, recorded crimes against women increased by 5.8% in 2015 compared to the last non-Modi year 2013.
The appalling state of convictions by courts in cases of crimes against women continues under Modi rule, worsening in several instances. While conviction rates for rape, attempt to rape, kidnapping and abduction showed minor increases, they are still such that roughly three quarters of those brought to trial are let off by courts. Conviction rates for three other violent crimes against women – assaults with intent to “outrage modesty”, “insult to modesty” and cruelty by husbands and relatives – actually declined under Modi if one compares 2015 to 2013. Overall, under Modi raj, conviction rates for crimes against women have declined from an already outrageous 22.4% in 2013 to 21.7% in 2015.

Since last year, Modi government has taken upon the responsibility of salvation of Muslim women by ending triple Talaq. While this practice is no doubt anti-woman but is the Modi government really interested in the welfare of Muslim women? It doesn’t seem like it. Because BJP’s and Modi’s answer to this archaic practice is uniform civil code. One might ask what will be the character of this uniformity. We all know RSS wants to make India a Hindu Rashtra. So, one can infer that this proposed uniformity will destroy our multi-cultural society to create the nation of RSS’ dream.
Also, Modi and his beloved Sangh parivar, who consider themselves the sole repository and protector of Hinduism, have completely failed to raise their voice against a host of heinous anti-women practices which are widely prevalent in the majority community. These include dowry, dowry murders, son preference driven female feticide and infanticide, and various rituals and customs for keeping women enslaved to menfolk. To don the cloak of reform of anti-women practices in Islam only and turn a blind eye towards Hinduism exposes the fraudulent nature of this anti-triple talaq stance of the govt.
So, what does it mean to be a woman under Modi raj? It means that women’s place is in the shadows. And they shall remain in the shadows till the patriarchal society need their services.