On the occasion of the joint resolution adopted by the EU Parliament with the votes of the MEPs from the European People's Party, the Socialists & Democrats, Conservatives-Reformists and Liberals (ALDE) regarding the situation in Venezuela, the Europarliament Group of the KKE (Communist Party of Greece) issued the following statement:

"The Europarliament Group of the KKE voted against the resolution which was filed at the EU Parliament by the EU People's Party, the Social Democrats, the Liberals and the Conservatives-Reformists about the situation in Venezuela. The resolution, which supports the opposition parties, calls, among others, the high representative of the Union for foreign affairs "to actively explore with international and regional organisations other measures that would enable the EU to restore full democracy to Venezuela". That is in fact another resolution of the Europarliament, like the previous ones regarding Syria, Libya, Ukraine etc, that consists a precursor and preparation for imperialist interventions of the EU, alongside the USA and other imperialist organisations, such as NATO.

The EU- this inter-state union of capital and her institutions- are not legitimized to proclaim themselves as supposed supporters of peoples freedoms and enforcement instruments of EU's "democratic values" and "principles". The interest of all the bourgeois powers, of the EU and the USA, for the dead protesters and people's freedoms in Venezuela is hypocritical. What they care about is only that their own corporation businesses will dominate over their rivals and to take share of Venezuela's energy wealth, the top oil-producing country in the world.

By hiding this reality, the government (Syriza) and New Democracy are engaged in a fight for impressions about the situation in Venezuela, in order to disguise their strategic compilation in promoting the antiworkers policy. The stance of SYRIZA MEPs, who in the beginning had voted against (the resolution) but now they appear as... abstained from the voting, is revealing. 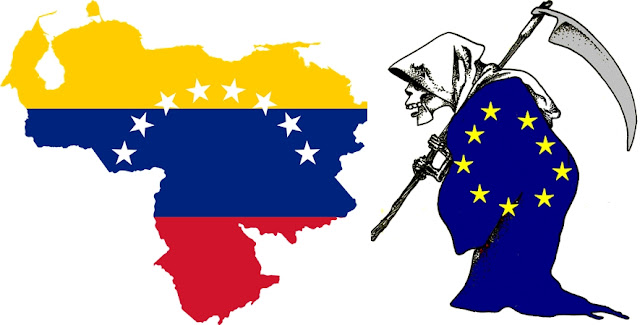 The KKE has on time analysed the economic, political and social developments in Venezuela, stressing that the management of capitalism, whatever form it has, either liberal or socialdemocratic, is contrary to the people's interests and needs. The KKE had, documented and on time, warned that since the government of the last years in Venezuela choosed, instead of the clash with the capital, the compromise and co-operation with a part of it, the people of Venezuela will pay the price of the antipeople policy, the antagonisms between sections of the bourgeois class which are sharpening today.

The KKE had condemned and condemns every foreign imperialist intervention. It steadily expresses its solidarity to the people of Venezuela who, like every people, have the exclusive right to overthrow the antipeople policies, to free themselves from the shackles of capital's exploitation with their power and struggle, to take the power in their hands and become the owners of their own producing wealth.