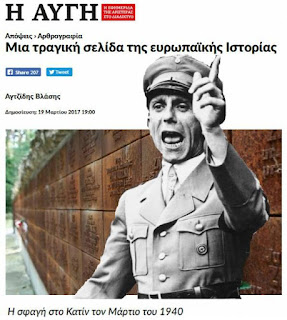 "The whole goebbelist propaganda about the murder of thousands of Polish officers by the Nazis at Katyn forest in 1941 (which was attributed to the USSR by the crumbling Nazi Germany in 1943) is, once again, adopted by "Avgi" and her known anticommunist "stalinologist" article writer Vlasis Agtzidis. The article reproduces one of the most characteristic products of History's counterfeiting during the counter-revolution period of Gorbachev and Yeltsin in the USSR, in 1991-92, when the notorious document of the 5th March 1940 appeared, according to which Stalin supposedly gave his permission for the slaughtering of the Polish officials.


That specific case is highlighted on several occasions by the anticommunists-forgers of History, who deliberately hide its basic aspects. Like, for example, that Goebbels himself characteristically writes in his "memoirs": "Unfortunately, German ammunition has been found in the graves at Katyn… It is essential that this incident remains top secret. If it were to come to the knowledge of the enemy the whole Katyn affair would have to be dropped."

Also, the hands of the executed were tied with rope produced in Germany, while documents and letters dated after the German invasion were found on the victims. It seems that all these are meaningless details for "historians" like Agtzidis and newspapers like "Avgi" which pleasantly diffuses the anticommunist poison through her pages".