"Enough! It's time for uprising" - KKE calls for people's struggle against new measures 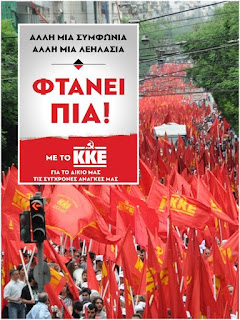 "Another agreement - Another looting. Enough is enough! It's time for an uprising!". With this slogan the Communist Party of Greece (KKE) organises a broad campaign within the country's working people thus calling them to organize their struggle against the new pack of measures that the SYRIZA-ANEL government is negotiating with the creditors.

A KKE pamphlet writes among other things (translation from Greek):

"A WALL OF PEOPLE'S RESISTANCE AND COUNTER-ATTACK must be built against the new package of measures that the SYRIZA-ANEL government is negotiating with the EU and the IMF.

The new agreement will escalate the attack against the working people, the self-employed people, the pensioners, against all people.

It brings new overthrows in workers' rights, new cuts in pensions, new attack on the people's income through tax-robbery. It prepares the antipeople framework for the post-2018 period.
[...]

No more waiting - No tolerance to the new mockery of "counter-measures" and "fair development".

The latest data confirm that the recovery of the Greek economy will be tortuous, uncertain, in the background also of the international developments.

Even if a development takes place, it will be for the profits of the few. Austerity will not end for the people.

The fights between the government, the New Democracy and the other parties are not taking place for the people's interests.

Behind their fights for the "show" lies the real reason for the confrontation: Who is more capable to pass the "reforms" that the capital asks for. On this task they are giving exams."

"The working-peoples movement, in Greece and Europe, can utilize the rifts and the contradictions in the imperialist alliances in order to weaken them. It (the movement) must connect the struggle for the disengagement from the EU with the struggle for the overthrow of capital's power which, as long as it exists, will lead to such reactionary antipeople alliances". [...]

"Greece must get OUT of the imperialist plans and wars". It is needed to strengthen the struggle for:

- The disengagement of Greece from the imperialist coalitions, NATO and the EU.
- No participation of the country in missions abroad.
- Closure of the foreign bases in Greece- NATO out of the Aegean".

The pamphlet of the KKE concludes with the following:

"There is no other way to repel the attack on the working-people's rights, to assert the replenishment of the losses, for an elementary satisfaction of the contemporary needs.

This is the way to prepare the new confrontations, the new victorious struggles.

Having as an aim the real power of the people, the only one which can satisfy their contemporary needs, according to the scientific and technological achievements and the capabilities of the country. To delete the debt, to disengage Greece from the imperialist alliances".