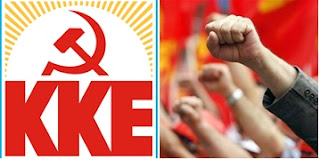 In its greeting message towards the KKE's 20th Congress, the Communist Party of Venezuela (Partido Comunista de Venezuela) writes among other things:

"The Communist Party of Venezuela evaluates as very important the contribution of the Communist Party of Greece in its nearly 100 years of history, in the class struggle against our common enemy, capitalism, which today is in its highest state, the imperialist one. We accompany you in your efforts for the domination of socialism-communism internationally.

The Communist Party of Venezuela also recognizes the effort and the actions of your party for the consolidation and strengthening of the international communist movement. The invitation of the KKE to the communist and workers' parties in all over the world, in 1998, to participate in the International Meeting of Communist and Workers' Parties (IMCWP)- as a discussion platform and solidarity- was decisive for the global class struggle of the proletariat. It is a meeting which must more and more assume its responsiblities during times of the international rights' counterattack, which includes the social democratic reformist section as well as expressions of the neo-fascist far-right.

The Communist Party of Venezuela shares the revolutionary class vision of the KKE, the formation of the marxist-leninist proletarian vanguard and the militant international solidarity".

The Communist Party of Turkey (TKP) refers to the long-standing fraternal relations between the the KKE and TKP and points out in its letter to the CC of the KKE that [especially after the 1990] "...the intervention of the KKE in the International Communist Movement towards the marxist-leninist principles, as well as its will to rally the Communist Parties were of critical importance. [...] We evaluate as an issue of big importance the theoretical wealth which is included in the Theses for the KKE's 20th Congress and we will make a serious effort to convey it to the cadres of TKP".

In its message to the 20th Congress of the KKE, the Brazilian Communist Party (Partido Comunista Brasileiro) refers to the KKE as "an example of discipline and organisation of its Party members and mass struggle" and continues: "We also recognize the good work of the KKE in the international level, where it has a crucial role in the building of better relations among the Communist and Workers Parties for the exchange of information and for the proposal of common actions against capitalism and imperialism".

Mexico's Communist Party (Partido Comunista Mexicano) writes: "We are proud that we are going together with the KKE and we share what the Theses [of the KKE's CC] express, and which identify the KKE as the Party of the revolutionary overthrow, because this is the task for the party of the working class and that is what distinguishes it qualitatively [...] The correctness of the KKE's policy is manifested in the vitality of the organisations with a class orientation, particularly within PAME, and which are heroically supported by the working class, with exemplary general strikes and other forms of workers' struggle".

"Also the KKE", write the comrades of the Communist Party of Mexico in its letter, "fulfills, without equivocations, the tasks arising from its consistency to the marxist-leninist principle of proletarian internationalism and internationalist solidarity thus contributing to the preservation of the communist characteristics of the International Meetings of Communist and Workers' Parties, fighting tirelessly for the ideological and organisational reconstruction of the international communist movement. We are witnesses of its [the KKE's] dedication to the theoretical equipment of the marxist-leninist worldview of the communist parties and the practical solidarity to overcome the difficulties. The various initiatives of the KKE fuel the resurgence of communism, inspire other parties, organisations and working people to raise the red flag of marxism-leninism".

The New Communist Party of Yugoslavia (Nova komunistička partija Jugoslavije- NKPJ) describes the KKE as "an example for the entire communist movement" praising it for the accuracy in the analysis, the indicative purity of the goals, the effective political pratice within the working masses, the political coherence and the dedication to marxism-leninism and scientific socialism.

From the United States, the Party of Communists USA points out that the decision of the KKE to deny any participation in the SYRIZA government was totally correct and praises the KKE because "it stood upright through principled and consistent struggle against the compromised ones and consists a beacon for all the Communist Parties which face similar situations in the countries".

The Communist Party of India (Marxist) writes: "The KKE plays an important role not only in Greece, but also in the international communist movement. The decisions that you will take in this Congress will bear a great significance [...] The struggles of the KKE continue to inspire us. Also we congratulate the important work done by the KKE and its members in the refugees [issue]". The same perception is shared by the Communist Party of India (CPI) which expresses its deep admiration for the special role and contribution of the KKE in the creation of a meeting place for all the Communist and Workers Parties of the world, something that confirms its faith in Marxism-Leninism as a source of inspiration for the struggling people everywhere.

From its side, the German Communist Party (Deutsche Kommunistische Partei-DKP) points out the following: "The German Communist Party admires the heroic and the more and more harder struggle of the KKE against the increasing impoverishment of large parts of the Greek people and agrees with your clear marxist-leninist analysis regarding the conditions of the class struggle and the international and national level".

"The contribution of the KKE in the reconstruction of the international communist movement after the counterrevolution in the USSR is priceless" stresses the Party of Labour of Austria (Partei der Arbeit Österreichs, PdA). Furthermore, the PdA writes: "The struggles, the organisation and the elaborations of the KKE are source of inspiration and power for thousands of communists in the world. The KKE remains a shining example as a strong militant working class party, consistent with marxism-leninism, the revolutionary strategy and class struggle. The members of the Party of Labour are proud for the fraternal relations between our parties. All these years the KKE has actively supporterd our efforts to build a strong revolutionary party of the working class in Austria and to gain a place in the international communist movement".
* * *

The above consist an example of how numerous communist and workers parties across the world evaluate the work, the role and the contribution of the KKE in the effort for the reconstruction and re-organisation of the international communist movement. The KKE, having sense of its internationalist responsibility, plays a truly significant role at the International Meetings of Communist and Workers' Parties (IMCWP) and opposes every position that aims to open these Meetings to social-democratic formations which are hiding under the labels of "anti-imperialism", "progressive", "left" etc. The KKE has contributed thoroughly to the organisation of the substantial exchange of views within the IMCWP, the ideological and political discussion on crucial issues on strategy and tactics, as well as the perspectives for common activities and collaborations between the communist and workers parties which can be developed for the interests of the working class.

Below you can read the full list of the communist and workers parties that sent messages of greetings to the KKE's 20th Congress (as they are published in 902.gr portal):

In Defense of Communism ©