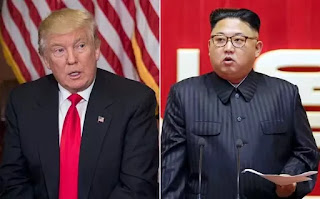 KCNA (Korean Central News Agency) Commentary on U.S. Inveterate Repugnancy and Hostility toward DPRK.
Source: Solidnet.
Pyongyang, March 9 (KCNA) -- The U.S. State Department in "2016 country report on human rights" published on March 3 cited "data" on "human rights issue" in the DPRK and went so bully as to list the DPRK as an "authoritarian state".
The State Department made a flurry of rhetoric, let out by human scum-like "defectors from the north" who fled the country after committing crimes against their kinsmen and the nation, established facts in a bid to use them for tarnishing the dignity of a sovereign state. This is an expression of inveterate repugnancy and hostility toward the ideology and social system in the DPRK.
We strongly reject its "human rights report" aimed to threaten the political stability of a country and bring down its social and political system under the "human rights standard" based on the American view on value.

Aggression and interference in the internal affairs of other countries and nations are justified on the international arena at present under the "human rights standard" set by the U.S. and other Western countries.
Prompted by their unilateral interests, quite irrelevant to human rights, the U.S. and other Western countries label other countries preserving their own social system and political mode "human rights abusers" and put collective pressure on them.
The recent report, too, took issue with human rights situation in other countries through prejudice and fabrication guided by the American-style "human rights standard" as before.
But the U.S. is the worst human rights abuser as it brought down legitimate states through "color revolution" and spawned the worst-ever refugee problem while wantonly interfering in the internal affairs of sovereign states under the signboard of "defence of human rights".
It is ridiculous for the U.S. to publish the report faulting the human rights performance in other countries while styling itself "human rights judge," being unaware of where it stands.
Polaris, a flesh traffic information body, made public a report that flesh traffic in the U.S. in 2016 increased 35.7 percent as compared with that in the previous year, a clear proof of the poor human rights performance there.
Polaris in its report disclosed that 7 572 cases of flesh traffic occurred in California, Texas, Florida and other states of the U.S., terming it "one form of modern-day slavery".
The U.S. is heading for the grave of history due to the extreme gap between the rich and the poor and all sorts of social evils prevalent there. However, it is faulting the Korean-style socialist system where the working masses fully enjoy genuine political freedom and rights and a happy life. It is ridiculous, indeed.
No country considers that the U.S. is making "efforts" to work out "human rights reports" on other countries out of its true concern about human rights performance.
The U.S. "human rights report" is just a tool for aggression for bringing down the ideology and system of other countries and attaining its domination aims.
A clear proof of this is the human rights abuses perpetrated by the hegemonic forces in various countries of the world like Iraq.
The U.S. has no elementary moral qualifications to talk about "human rights issue" of the DPRK as it threatens the right to existence of the Korean people to the extremes through the unprecedented blockade-type "sanctions" pursuant to its vicious hostile policy toward the DPRK.
All the countries on earth have the right to exercise their right to realize their own independent desire under the institutional and legal guarantees provided by the state where they reside.
The "human rights report" annually made public by the U.S. for decades is aimed to infringe upon the sovereignty of other countries. This fact glaringly reveals the nature of the U.S. styling itself an "international judge".
The U.S. will get nothing through the "human rights" smear campaign, part of its hostile policy toward the DPRK.
The people in the DPRK are enjoying genuine political freedom and rights and a happy life under the best socialist system in the world. The DPRK will invariably advance along the road of promoting the Korean-style human rights chosen by its people themselves while foiling the U.S. hostile rhetoric about "human rights".
Human rights can never be a playing thing of the U.S.