Jack London- How I Became A Socialist 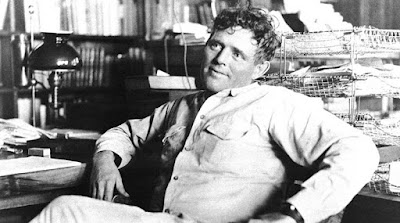 It is quite fair to say that I became a Socialist in a fashion somewhat similar to the way in which the Teutonic pagans became Christians–it was hammered into me. Not only was I not looking for Socialism at the time of my conversion, but I was fighting it. I was very young and callow, did not know much of anything, and though I had never even heard of a school called “Individualism,” I sang the paean of the strong with all my heart.
This was because I was strong myself. By strong I mean that I had good health and hard muscles, both of which possessions are easily accounted for. I had lived my childhood on California ranches, my boyhood hustling newspapers on the streets of a healthy Western city, and my youth on the ozone-laden waters of San Francisco Bay and the Pacific Ocean. I loved life in the open, and I toiled in the open, at the hardest kinds of work. Learning no trade, but drifting along from job to job, I looked on the world and called it good, every bit of it. Let me repeat, this optimism was because I was healthy and strong, bothered with neither aches nor weaknesses, never turned down by the boss because I did not look fit, able always to get a job at shovelling coal, sailorizing, or manual labor of some sort.
And because of all this, exulting in my young life, able to hold my own at work or fight, I was a rampant individualist. It was very natural. I was a winner. Wherefore I called the game, as I saw it played, or thought I saw it played, a very proper game for MEN. To be a MAN was to write man in large capitals on my heart. To adventure like a man, and fight like a man, and do a man’s work (even for a boy’s pay)–these were things that reached right in and gripped hold of me as no other thing could. And I looked ahead into long vistas of a hazy and interminable future, into which, playing what I conceived to be MAN’S game, I should continue to travel with unfailing health, without accidents, and with muscles ever vigorous. As I say, this future was interminable. I could see myself only raging through life without end like one of Nietzsche’s blond-beasts, lustfully roving and conquering by sheer superiority and strength.
As for the unfortunates, the sick, and ailing, and old, and maimed, I must confess I hardly thought of them at all, save that I vaguely felt that they, barring accidents, could be as good as I if they wanted to real hard, and could work just as well. Accidents? Well, they represented FATE, also spelled out in capitals, and there was no getting around FATE. Napoleon had had an accident at Waterloo, but that did not dampen my desire to be another and later Napoleon. Further, the optimism bred of a stomach which could digest scrap iron and a body which flourished on hardships did not permit me to consider accidents as even remotely related to my glorious personality.
I hope I have made it clear that I was proud to be one of Nature’s strong-armed noblemen. The dignity of labor was to me the most impressive thing in the world. Without having read Carlyle, or Kipling, I formulated a gospel of work which put theirs in the shade. Work was everything. It was sanctification and salvation. The pride I took in a hard day’s work well done would be inconceivable to you. It is almost inconceivable to me as I look back upon it. I was as faithful a wage slave as ever capitalist exploited. To shirk or malinger on the man who paid me my wages was a sin, first, against myself, and second, against him. I considered it a crime second only to treason and just about as bad.
In short, my joyous individualism was dominated by the orthodox bourgeois ethics. I read the bourgeois papers, listened to the bourgeois preachers, and shouted at the sonorous platitudes of the bourgeois politicians. And I doubt not, if other events had not changed my career, that I should have evolved into a professional strike-breaker, (one of President Eliot’s American heroes), and had my head and my earning power irrevocably smashed by a club in the hands of some militant trades-unionist.
Just about this time, returning from a seven months’ voyage before the mast, and just turned eighteen, I took it into my head to go tramping. On rods and blind baggages I fought my way from the open West where men bucked big and the job hunted the man, to the congested labor centres of the East, where men were small potatoes and hunted the job for all they were worth. And on this new blond-beast adventure I found myself looking upon life from a new and totally different angle. I had dropped down from the proletariat into what sociologists love to call the “submerged tenth,” and I was startled to discover the way in which that submerged tenth was recruited.
I found there all sorts of men, many of whom had once been as good as myself and just as blond-beast; sailor-men, soldier-men, labor-men, all wrenched and distorted and twisted out of shape by toil and hardship and accident, and cast adrift by their masters like so many old horses. I battered on the drag and slammed back gates with them, or shivered with them in box cars and city parks, listening the while to life-histories which began under auspices as fair as mine, with digestions and bodies equal to and better than mine, and which ended there before my eyes in the shambles at the bottom of the Social Pit. 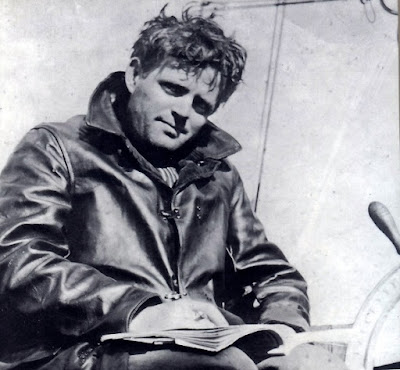 And as I listened my brain began to work. The woman of the streets and the man of the gutter drew very close to me. I saw the picture of the Social Pit as vividly as though it were a concrete thing, and at the bottom of the Pit I saw them, myself above them, not far, and hanging on to the slippery wall by main strength and sweat. And I confess a terror seized me. What when my strength failed? when I should be unable to work shoulder to shoulder with the strong men who were as yet babes unborn? And there and then I swore a great oath. It ran something like this: All my days I have worked hard with my body, and according to the number of days I have worked, by just that much am I nearer the bottom of the Pit. I shall climb out of the Pit, but not by the muscles of my body shall I climb out. I shall do no more hard work, and may God strike me dead if I do another day’s hard work with my body more than I absolutely have to do. And I have been busy ever since running away from hard work.
Incidentally, while tramping some ten thousand miles through the United States and Canada, I strayed into Niagara Falls, was nabbed by a fee-hunting constable, denied the right to plead guilty or not guilty, sentenced out of hand to thirty days’ imprisonment for having no fixed abode and no visible means of support, handcuffed and chained to a bunch of men similarly circumstanced, carted down country to Buffalo, registered at the Erie County Penitentiary, had my head clipped and my budding mustache shaved, was dressed in convict stripes, compulsorily vaccinated by a medical student who practised on such as we, made to march the lock-step, and put to work under the eyes of guards armed with Winchester rifles–all for adventuring in blond-beastly fashion. Concerning further details deponent sayeth not, though he may hint that some of his plethoric national patriotism simmered down and leaked out of the bottom of his soul somewhere–at least, since that experience he finds that he cares more for men and women and little children than for imaginary geographical lines.
To return to my conversion. I think it is apparent that my rampant individualism was pretty effectively hammered out of me, and something else as effectively hammered in. But, just as I had been an individualist without knowing it, I was now a Socialist without knowing it, withal, an unscientific one. I had been reborn, but not renamed, and I was running around to find out what manner of thing I was. I ran back to California and opened the books. I do not remember which ones I opened first. It is an unimportant detail anyway. I was already It, whatever It was, and by aid of the books I discovered that It was a Socialist. Since that day I have opened many books, but no economic argument, no lucid demonstration of the logic and inevitableness of Socialism affects me as profoundly and convincingly as I was affected on the day when I first saw the walls of the Social Pit rise around me and felt myself slipping down, down, into the shambles at the bottom.
IN DEFENSE OF COMMUNISM ©