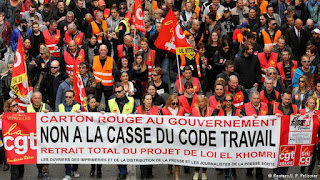 For these developments, which multiply all over Europe, great are the responsibilities of the trade union organizations-members of the ETUC, who for years cultivate the idea of the “lesser evil”, of tolerance to anti-workers’ governments, of subjugation to the demands of the bosses. They are responsible, because for years they were saying to the workers not to fight, instead, with the so called “social dialogues” to surrender their rights to the employers, in the name of “social peace”. But their “peace” is built over the poverty and misery of the workers.
We salute the great struggles of the French workers and we stand by their side against the antiworkers’ attack and oppression of the French Government.