Would the situation for Greek people be better if KKE participated in a government with SYRIZA? 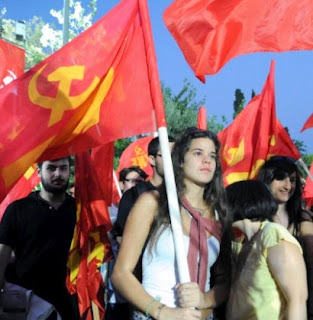 Question: Would it not be better if KKE participated in a government with SYRIZA or even supported it critically so that it could shape government policy?

The experience of the 1 year government of SYRIZA confirms the fundamental conclusion that there cannot be a pro-people management of the rotten and obsolete capitalist system. The government of SYRIZA not only did not give whatever crumbs promised to the people, but continues the same unpopular policy as the previous governments, it did not overthrow even one anti-people law from those which were voted in the previous years, it voted a 3rd barbarous memorandum with the lenders. The participation or support of KKE in such governance would mean betrayal of the people’s interests. It is not a matter of intentions, besides as historical experience shows, the road to hell is paved with good intentions. The illusion that the participation of Communist Parties to bourgeois governments can pressure for something better for the people, has been answered not only by KKE but also from other revolutionaries.
Characteristically the words of Rosa Luxemburg: “The entry of a socialist into a bourgeois government is not, as many think, a partial conquest of the bourgeois state by the socialists, but a partial conquest of the socialist party by the bourgeois state.” Ever since, history and of course the history of KKE, have repeatedly proved this to be true. Examples of the participation of Communist Parties in bourgeois governments in France, Italy and elsewhere, show that not only did they not bring radical changes to the benefit of workers but instead scattered disappointment to the people, led the Communist Parties to even greater compromises, to abandon revolutionary principles and in the end to the very refutation of the existence of the Communist Parties.

Our Party studying its own as well as this international experience, based on our principles, our theory, our strategic goal, i.e. the raison d’ etre of a Communist Party which is the overthrow of capitalism and the building of the socialist society, has resulted in the position which is set out in its program: that during the era of transition from capitalism to socialism, the Communist Party must not take responsibilities in a bourgeois government or generally in a government of bourgeois management. As long as the working class has not the power in its hands, the Communist Party must be an opposition force and from this position to justify its title as the vanguard of the working class fighting for the organisation and realisation of the class, to build its alliance with its social allies, overall the concentration of forces and the ideological – political - organisational preparation for the overthrow of capitalism in revolutionary state conditions. The participation in a bourgeois government constitutes a mistake not easily corrected and can prove fatal, it is a matter of strategic importance.

KKE 4 years ago, in the elections of 2012 undertook the burden of responsibility for this position, when the pressure was very heavy for participation in a government like this of today. This option had election costs but they failed to subjugate KKE in bourgeois planning, this is the most important. If KKE had succumbed it would have been a calamity for the people as workers, young people would be left without the force that can lead the struggle to overthrow capitalism. We would be adding more grist to the mill of illusions if we said that the important issue was to change a government in the territory of capitalism and not the class in power.

Source: 'Odigitis' (Organ of the CC of KNE, the Communist Youth of Greece), International Edition, February 2016.