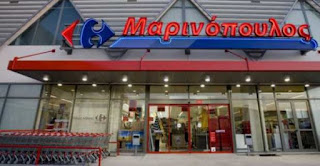 The Marinopoulos supermarket chain, one of the biggest in Greece, applied for Bankruptcy in Operation.  An Athens court will discuss the request on July 1st, 2016 and until then the company will have protection from its creditors.

The move is considered a big blow with a possible domino effect threatening to send 11,000- 13,000 people to unemployment. The Company with 700 stores across the country is said to owe 500 million euro to some 2,500-3,000 suppliers, while the debts to the state and social security funds are over 40 million euro.

The employers did not give any information to the unions, who have organized protests outside the supermarkets and the offices of the chain, all over Greece to protect the employees’ job positions.


On Wednesday, June 29, the Union of Employees in Commerce-Retail of Athens demanded meeting with the employers, only to face the police forces that surrounded the offices of the company. After a militant action of the union, a representative of the company was forced to talk with the workers about the company’s plans.
The union demands
Info from PAME (All-Workers Militant Front) and news sites.

Solidarity with the workers at the Marinopoulos supermarket chain!