KKE: Solidarity message to the Communist Party, Turkey (KP) for the criminal attack in Istanbul's airport 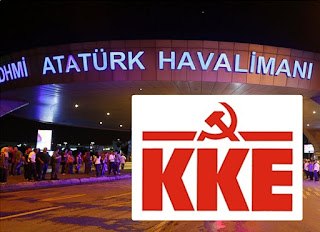 The International Relations Department of the CC of KKE sent the following message of solidarity to the Communist Party, Turkey (KP):

We express our condolences for the victims of the criminal attack in the airport of Istanbul.

The people of the region must be alerted, because the contradictions and the clashes of imperialists in the region consist the soil upon which people shed their blood and such actions are imbedded in escalation plans of interventions and wars for the profits of the monopolies, imposing of repressive measures against the working people.

The AKP goverment bears serious responsibilities as long as with its policy has directly implicated Turkey in imperialist plans and antagonisms.

The people of the region, who pay a heavy toll of blood for the movements and upheavals between NATO, EU, US and Russia, Israel and the Gulf's monarchies, have every interest to unite in a common struggle, contrasting their interests against the interests of the monopolies, of the bourgeoisies, of the imperialists.


Please, convey to the working class, to the people of Turkey and to the families of the victims the internationalist solidarity of Greek communists.