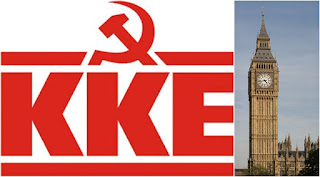 The result of Britain's referendum demonstrates the increasing discontent of the working class and popular forces towards the EU and its anti-people policies. However these forces must disentangle themselves from the choices of sections and political forces of the bourgeoisie and acquire radical and anti-capitalist characteristics. The result records the dissipation of the expectations, which had been fostered by all the bourgeois parties-in Greece as well-together with the EU's mechanisms that the peoples could allegedly be prosperous inside the framework of the EU.
The fact that the issue of the departure of a country from the EU was posed so intensely- and indeed a country the size of Britain-is due on the one hand to the internal contradictions in the EU and the unevenness of its economies and on the other to the confrontation taking place amongst the imperialist centres, which sharpened in the conditions of the economic recession. These factors reinforce the so-called euroscepticism, break way trends, but also trends that seek a change in the form of political management of the EU and Eurozone.


Vehicles of reactionary "Euroscepticism" are nationalist, racist and fascist parties, like the UK Independence Party of Farage (UKIP), the National Front of Lepen in France, the "Alternative for Germany" and similar formations in Austria, Hungary and in Greece, e.g. fascist Golden Dawn, National Unity of Karatzαferis and others. But  "Euroscepticism" is also expressed by parties that use a leftwing label, criticize or reject the EU and Euro, support a national currency and seek other imperialist alliances, with a strategy that operates within the framework of capitalism.
These contradictions and antagonisms permeate the bourgeois classes of every EU member-state. The economic and political processes underway, both in G. Britain and in the EU, the negotiations concerning the position of the British bourgeoisie the day after, can lead to new temporary agreements between the EU and Britain. What is certain is that as long as capitalist ownership of the means of production and bourgeois power remain in place, the developments will be accompanied by new painful sacrifices for the working class and popular forces.
The result of Britain's referendum exposes the other political forces in Greece, which glorified Greece's participation in the EU during all the previous years, presenting it as an irreversible process or sowing illusions about the need for even "more Europe of democracy and justice» It also exposes those forces that consider a national currency as being a panacea that will lead to the people's prosperity. Britain with its Pound Sterling took the same anti-worker and anti-people measures as the other countries that are in the Eurozone. It will continue to take the same measures outside the EU as well, as this is imposed by the need for its monopolies to be competitive and profitable.
It is certain that over the next few days the voices and "tears" will multiply, both on the part of the SYRIZA-ANEL government and on the part of the other bourgeois parties about the "need to reestablish the EU", about the "EU that lost its way and needs to return to its roots" etc. However the EU since its creation has been and is a reactionary alliance of the bourgeois classes of capitalist Europe, with the aim of bleeding the workers dry and robbing other peoples of the world, in the framework of their competition with other imperialist centres. It was not and will not be a permanent arrangement, just as similar alliances in the past were not permanent. Capitalist unevenness and competition, the change in the correlation of forces sooner or later will bring contradictions to the surface, which will no longer be able to be bridged by temporary and fragile compromises. Simultaneously, new phenomena, processes for new reactionary alliances will be come to fruition on the terrain of capitalism.
The interests of the Greek people, the British people, of all the peoples of Europe must not be placed under a "false flag». They must not be placed under the flags of the bourgeoisie and its various sections, which determine their choices and international alliances according to their interests and on the basis of the greatest possible exploitation of the workers. The necessary condemnation of capital's predatory alliance, the EU, the struggle for the disengagement of every country, to be effective, must be connected to the necessary overthrow of capital's power by workers'-people's power. The social alliance of the working class and the other popular strata, the regroupment and strengthening of the international communist movement are preconditions to pave the way for this prospect of hope.