Serbia: Death threats against the Communist Party - "We will slaughter you" 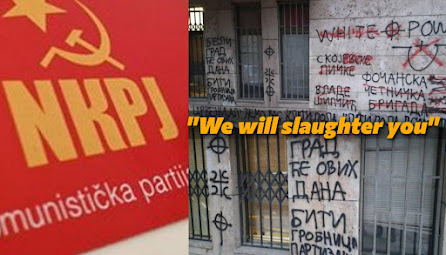 Back in October, the headquarters of the New Communist Party of Yugoslavia (NKPJ) in Belgrade had become the target of vandalism. "The New Communist Party of Yugoslavia informs you that Neo-Nazis organized a new attack on our Headquarters in Belgrade. They demolished our windows and wrote anti-communist and Neo-nazi slogans", a party statement was stressing out.

Recently, the Party's premises were once again targeted by fascist groups. According to a statement issued the NKPJ and the Union of Communist Youth of Yugoslavia (SKOJ) fascists vandalized the offices by breaking windows and writing graffiti slogans with death threats.

The most gruesome graffiti reads "Reds, we will slaughter you, half to the slaughter, half to the dogs". The slogan is signed with the Celtic cross, a well-known neo-fascist symbol.

According to the party statement, the new attack was carried out by members of the neo-Nazi skinhead group "Club 28", as act of revenge for the fact that the Communist Youth (SKOJ) publicly exposed the plans of the group to organize a neo-Nazi festival in Belgrade which hundreds of neo-Nazis from Europe and the U.S. were supposed to attend. For this reason, SKOJ Secretary Aleksandar Đenić received personal threats.

The NKPJ-SKOJ statement denounces the stance of the Serbian police which fails to bring to justice the perpetrators of these attacks, despite the fact that they are known to the authorities.

Due to death threats, hate speech and the demolition of their premises, SKOJ and NKPJ will organize a large anti-fascist protest rally in Belgrade on Saturday, December 17.

In the event that the attacks on the premises continue, SKOJ and NKPJ will request the resignation of the Minister of Internal Affairs, Bratislava Gašić, and organize demonstrations until he retires from that position.