In this way, “imperialist aggression” is interpreted unilaterally cultivating fallacious theories about a “multi-polar world” where many power centers control each other thus resulting in a... “peaceful world”. This perception spreads to the workers-popular movement the illusion that a “non-aggressive”, so-called “peaceful” capitalism is possible.

Certain misconceptions about the Leninist theory of imperialism can be found in recent articles, analyzes and statements of Communist Parties and groups on the Ukraine war:

1  They interpret imperialism by separating the economy from politics. Thus they focus on the political features of countries (military interventions, aggressive foreign policy, inequality in policy-shaping and decision-making, etc), putting in second place the dominant element of imperialism, its economic substance, which is the creation and dominance of the monopoly.

2  They view schematically and unchanged the ranking of countries in the imperialist pyramid, as if time has stopped and there are no constant rearrangements within the context of capitalism's uneven development. Thus, for example, capitalist states that are not at the top of the imperialist pyramid are practically “acquitted” of their participation in the formation and implementation of aggressive foreign policy.

3  They fail, or even worse avoid, to realize that on the basis of the economic substance of imperialism (monopoly) arise the common characteristics of all capitalist countries, regardless of the quantitative and qualitative differences that coexist dialectically.

4 They prioritize the creation of “anti-imperialist/anti-fascist fronts” by disconnecting the struggle of the popular movement from the goal of overthrowing the power of capital. Thus the basic contradiction (capital-labour) is replaced by other forms (imperialism vs anti-imperialism, fascism vs anti-fascism) which in turn lead to alliances that are stripped of their socio-class content.

The above contribute to the “birth” of anti-dialectical, opportunistic narratives about “good” and “bad” imperialists, about “anti-imperialist” blocs with China and Russia as leaders, about the “democratization of international relations”, etc, ending up calling the working class to mobilize under flags foreign to its interests, under various pretexts (e.g. “protection/liberation of the people of Donbass, “de-nazification/demilitarization of Ukraine”, etc).

A characteristic example is the resolution of the Communist Party of Spain (a participant in the anti-worker coalition government of the social democratic PSOE and Unidas Podemos) at the end of January, which cultivated a series of illusions about the US-NATO-EU confrontation with Russia (1). Indicative of the hypocrisy of the Spanish Communist Party's leadership is the fact that, among others, the resolution was calling for the “dissolution of NATO”, at a time when the same party participates in a government that provides assistance to NATO fleet in the Black Sea!

Disappointing – but expected based on its political course – is the stance of the Communist Party of the Russian Federation (CPRF) on the issue of the Ukraine war. Instead of taking a stance against the imperialist war waged by the Russian bourgeois class, the CPRF chose to side by President Putin, something that is reflected in its recent declarations, as well as in statements by Chairman Gennady Zyuganov, which adopt almost entirely the narrative of the Russian government (2) .

Contrary to the CPRF, the Russian Communist Workers' Party (RCWP) issued a statement acknowledging that Kremlin's actual goals is to strengthen the position of imperialist Russia in the international political scene, noting that the source of the war lies in the “inter-imperialist contradictions”. The RCWP hails the recognition of the “People's Republics” of Donbass by President Putin but, at the same time, points out: “Not the masters but the workers will die on both sides. To die for class brothers is worthy, but to die and kill for the interests of the masters is stupid, criminal and unacceptable” (3).

Unfortunately, a number of Communist Parties have failed to draw proper conclusions from the inter-imperialist crisis in Ukraine. A few of them went so far as to refer to the Russian invasion as a “legal military action, while others participated in openly pro-Russian rallies where the red flag with the sickle and hammer coexisted with Tsarist symbols (e.g. the flag of the “PR of Donetsk).

It becomes clear that those forces that adopt such views fail to understand that alliances in the imperialist system are temporal, constantly changing, exactly like power relations. It is not in the duties of the communist movement to attempt to play any role in the relations between the imperialists, by taking the sode of one or the other. “The working class, in case it is conscious, will not support any group of imperialistic predators”, V.I. Lenin wrote, while in his exceptional work “Under a False Flag” he underlined: “Present-day democracy will remain true to itself only if it joins neither one nor the other imperialist bourgeoisie, only if it says that the two sides are equally bad, and if it wishes the defeat of the imperialist bourgeoisie in every country. Any other decision will, in reality, be national-liberal and have nothing in common with genuine internationalism. [...] In reality, there can now be no talk of present-day democracy following in the wake of the reactionary imperialist bourgeoisie, no matter of what “shade” the latter may be” (4).

The perception of “supporting the least aggressive imperialist” is totally anti-Leninist and against the popular interests. Yes, of course NATO is the most criminal, the most barbaric imperialist alliance since the Second World War with dozens of bloody interventions in the Middle East, the Balkans and North Africa. Yes, the U.S governments, with the complicity of the EU, have been and remain the number one enemy for human peace. Yes, the struggle against the imperialist alliances of NATO and the EU is more timely and necessary than ever. But all these do not negate the objective role of capitalist Russia as a powerful imperialist power that competes with the Euro-Atlantic bloc. And as such, an imperialist power, Russia is also an enemy of the people's interests.

The example given by Lenin, who showed that the working class has absolutely no reason to drag itself behind the aspirations of one or the other imperialist, is extremely relevant: “A country, let us say, possesses three-fourths of Africa, whereas another possesses one-fourth. A re-partition of Africa is the objective content of their war. To which side should we wish success? [...] It is not the business of present-day democracy either to help the former country to assert its “right” to three-fourths of Africa, or to help the latter country (even if it is developing economically more rapidly than the former) to take over those three-fourths” (5).

The course of capitalist Russia since the predominance of the counterrevolution is more or less known. We recall that NATO's current rival was once an ally of the North Atlantic Treaty. In 1994 Russia joined NATO's “Partnership for Peace”. In 1997 Moscow and Washington DC signed the “founding act” of the cooperation. In 2002, under Vladimir Putin's presidency, the “NATO-Russia Council”, also known as Rome Declaration, was established. Back then, the power of the Russian capital wasn't at the same level as today. Through the years, Russia's bourgeois class stabilized strengthened its authority both internally and abroad, Russian monopoly groups accumulated capital and expanded their business significantly (6). As Russia upgraded its position in the imperialist pyramid and became capable of competing with the U.S and the EU, Moscow's foreign policy entered a new course, towards power struggle and clash with the Euro-Atlantic forces. Certainly, the aggressive expansion of NATO to Eastern Europe and the Baltic played a crucial role in the shaping of Russia's new foreign policy.

In February 2007, during his notorious speech at the Munich Security Conference, Vladimir Putin made clear the strategic intention of the Russian bourgeois class to assert even more actively and aggressively its upgrade in the international imperialist system and to expand the influence of Russian capital in the rest of the world (7). The escalation of the competition took the form of an armed conflict in 2008 with the war in Georgia and the secession of South Ossetia and Abkhazia. The – backed by the US and the EU – Ukrainian coup (Euromaidan) took place five years later, followed shortly by the annexation of Crimea by Russia. The above led to the culmination of the inter-imperialist competition between Moscow and the Euro-Atlantic powers, something that is reflected today in the war in Ukraine.

The so-called “communist” forces which, openly or covertly, call the working class to side with Russia's aspirations, use the groundless argument that a possible Russian victory in Ukraine leads to a “defeat” (or “retreat”) of NATO, Euro-Atlanticism, etc. Where does this conclusion come from? Even if the eastern expansion of NATO stops, the Russian invasion has already caused a tendency of mobilization in the Euro-Atlantic camp, an increase of military expenditures and the rearmament of Germany. At the same time, pro-NATO forces in Sweden and Finland found the opportunity to advance and promote their countries' accession to the imperialist alliance. The words of the former NATO military commander, Admiral James Stavridis, are characteristic: “Vladimir Putin may be the best thing that ever happened to the NATO alliance”, he said in a recent interview, underlining that the Russian invasion in Ukraine has prompted the West to bolster its defenses (8).

The fundamental conclusion is this: The working class, the people, have nothing to gain from the victory of one or the other imperialist power. The essential thing in any war is which class conducts it, for what purpose and at what stage of historical development. This is the compass for the communist movement, to utilize historical experience and interpret reality with the invaluable Marxist-Leninist theory as a guiding thread.

As the imperialist war in Ukraine continues with incalculable consequences for the Ukrainian and Russian people, hope lies in the stance of a number of Communist and Workers' Parties that illuminate the imperialist nature of the conflict, condemn the criminal US-NATO-EU plans as well as the unacceptable Russian invasion and refuse to make a choice between imperialists.

This stance is accurately and clearly reflected in the recent joint statement, issued on the initiative of the Communists Parties of Greece (KKE), Turkey (TKP), Mexico (PCM) and the CP of the Workers of Spain (PCTE) and co-signed by 68 Communist Parties and Youth organizations. The conclusion of the statement includes the substance of what the position of communists must be in the imperialist war: “The interest of the working class and the popular strata requires us to strengthen the class criterion for analyzing the developments, to chart our own independent path against monopolies and bourgeois classes, for the overthrow of capitalism, for the strengthening of the class struggle against imperialist war, for socialism, which remains as timely and necessary as ever” (9).

Originally published in Greek in atexnos.gr 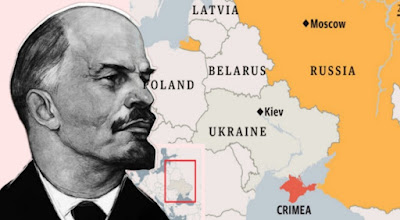 — A Leninist approach to the inter-imperialist clash in Ukraine