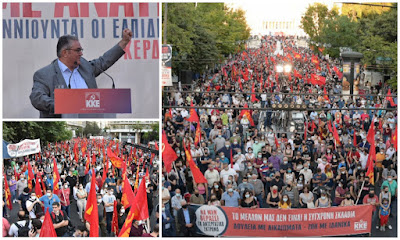 A powerful and militant message against the anti-labour policies of the government was sent by thousands of people who participated in the political rallies organized by the Communist Party of Greece (KKE) in Athens, Thessaloniki and other major cities on Thusrday afternoon.

In Athens' Syntagma Square, thousands of workers, men and women, self-employed and unemployed people, young students and pensioners, joined their voices against the monstrous anti-labour draft law prepared by the conservative ND government. Dimitris Koutsoumbas, the General Secretary of the CC of the KKE, delivered a speech, sending the message: “We refuse to become slaves in the 21st century! The monstrous anti-labour law must not be submitted!”. “Here, from Syntagma Square, with this large rally, as well as with the party rallies all over Greece, we are giving a response to the government's 'war communique'... The working class, the people, have no other choice but to respond to the war with war. With their own weapons: The broad information campaign, the organization, the unwavering class struggle, their righteous demands, the overthrow of this dark situation”, pointed out the General Secretary in his speech.

Refering to the anti-labour plans of ND government, which aims to extend the daily working hours to 10, Secretary Koutsoumbas stressed out: “The anti-labour monstrosity of the ND government continues and deepens the attack that the previous laws unleased for more than 10 years against the workers' achievements. The “disappearance” of the stable daily working time, the abolition of the eight-hour workday and the imposition of ten-hour labour, the restriction of trade unionist activity consist an overwhelming strike against the workers' rights”.

Dimitris Koutsoumbas added that the previous social democratic governments of SYRIZA and PASOK (KINAL) bear huge responsibility for the anti-labour, anti-people laws they created, pointing out that the aim of all bourgeois governments is “to adjust the labour relations in the changing needs of the greedy capital”. 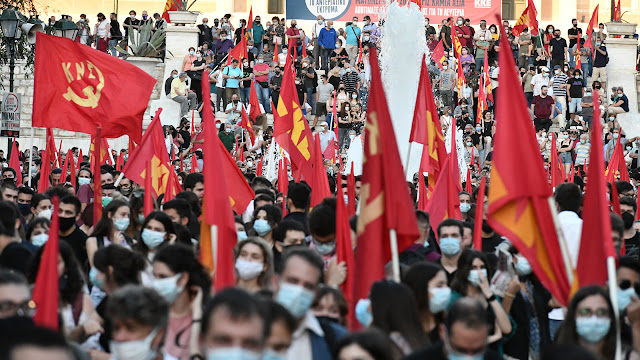 “They want to outlaw the right to strike and to legalize strikebreaking”, said Koutsoumbas, “because they believe that they will create new obstacles in the organization and the struggles of the working people, to transform strike into a symbolic action”. The KKE leader added: “We say to them. This is not Japan, where the workers supposedly strike by working and wearing a white. This Greece. There a history of class struggles here, a class working movement, there is PAME. The Communist Party of Greece is here, in this country”.

A similar, large rally was organized in Thessaloniki with hundreds of people gathering at the city's landmark, the White Tower. A speech was delivered by Kostas Paraskevas, member of the Political Bureau of the CC of the KKE. The Communist Party held successful political rallies in other major cities as well, including Patras, Ioannina, Volos, Trikala, Katerini, Livadia and elsewhere.