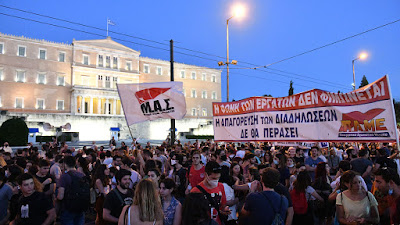 The despicable bill, which targets the people’s right in mass protest, was approved by 187-101 majority votes in Parliament. Except from the governing New Democracy MPs, the bill was voted by the deputies of KINAL (PASOK) and the far-right Greek Solution party.

Speeches at the rally were delivered, among others, by Giannis Tasioulas, President of the Association of Construction Workers of Greece, who pointed out that “there is no other way, but the weapon of the struggle which we are going to defend”. A delegation of the Central Committee of the Communist Party (KKE), headed by General Secretary Dimitris Koutsoumbas, attended the protest.

Similar rallies took place in other Greek cities, including a mass demonstration in Thessaloniki. 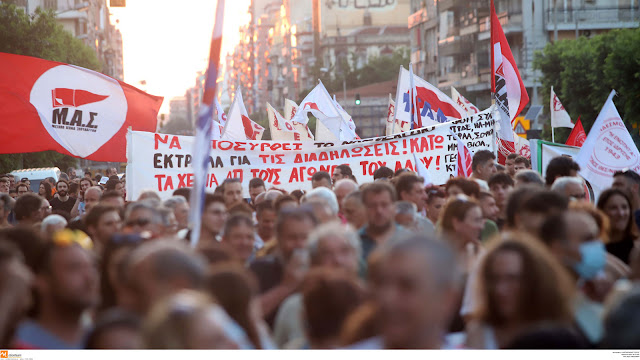 Koutsoumbas: The people will repeal the law in practice

In the Greek Parliament, during the discussion for the bill on demonstrations, the deputies of the Communist Party of Greece (KKE) strongly denounced and criticized the governmental effort to attack public gatherings.

“You had the audacity to take out of your drawers this despicable bill for the restriction of the protests and to bring it to the Parliament to vote for it. You are fooling yourselves if you think that this monstrous law will be finally implemented. The workers,  the people will nullify it in practice”, stressed out Dimitris Koutsoumbas, General Secretary of the KKE, during his speech.

The KKE leader also refered to the hypocritical stance of SYRIZA, the major opposition party which now accuses the government for anti-democratic practices but, in fact, followed a similar policy during its governmental term in 2015-2019.

Click on the link to read the full statement of the Political Bureau of the CC of the KKE on the governmental bill.

The Greek government’s attempt to put the workers movement on hold and ban the demonstrations is condemned by unions around the world who express their solidarity with the struggle of PAME and the Greek working class against the government plans.

Messages that condemn the Bill have been sent by unions:

Dozens of trade unionists and militants of the people’s movement from all over Europe are also sending their own personal message of struggle.