The developments in the USA, with more than 100.000 deaths due to the COVID-19 Pandemic, show the absence of social rights and the absence of a reliable public Health system. Now, with the police violence and murders against Afro-Americans, the myth of a “democratic state” is also uncovered.

The Pandemic, racial  and racist discriminations, poverty and unemployment reveal that the only that matters for the US government and President Trump is the capitalist profits. The life of the ordinary people has no value for the capitalists.

We demand the immediate end of police violence. The unemployed and the poor must be supported. The murderers of the Afro-Americans must be punished.

In a new statement issued today, 2 June, the WFTU Secretariat expresses its solidarity with the protests of the U.S. people against Trump government's repression and barbarism:

The popular outrage that erupted a week ago in the United States after the cold-blooded murder of 47-year-old African-American worker George Floyd by police in Minneapolis is continuing against the state repression and the brutal force used by the police. Hundreds of thousands of Americans took the streets over the weekend in more than 80 major cities, in two-thirds of the country’s states, to protest state barbarism and racist violence, of the repressive forces.

Despite the outcry over the 47-year-old’s death, the government is escalating threats to the masses and offering “more military means if governors and mayors need it and cannot control the situation”. One more time the capitalists and their governments prove that the life of the ordinary people has no value for the capitalists.

The organisations of the working class must be now in the forefront of the struggle for social justice, equality, against state oppression. The WFTU calls every trade union, every trade unionist who respects itself to support the struggle of the people in USA. We demand the immediate end of police violence. The unemployed and the poor must be supported. The murderers of the Afro-Americans must be punished.

The WFTU calls its affiliated organisations in every corner of the world to participate in the WFTU Campaign by taking pictures in groups, submit solidarity statements to the US embassies and take any support initiatives they can.

PAME: Solidarity with the struggle of the workers and people of USA against barbarism 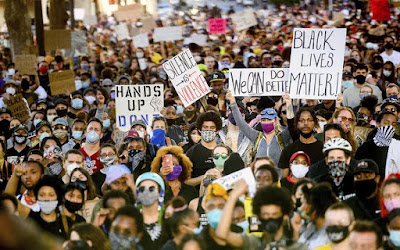 In a message of solidarity to the working people of the United States, the All-Workers Militant Front (PAME) from Greece points out:

PAME, a member of the WFTU, expresses its solidarity with the workers and the people of the United States who are on the streets of rage against barbarism and misery.

The assassination of George Floyd was another death toll in the world’s richest country. Murdered either by racism or by poverty. The pain and misery of millions of poor Americans is shared by that of the thousands of Greek immigrants in USA, as well as the thousands of refugees and immigrants in Greece today who have experienced and continue to experience racism.

We salute with pride and class solidarity the unions, trade unionists and workers who, with multiform and organized manner, they stand by the protesters during these difficult and critical times and oppose the repression and arrests of militants.

The exploitation of developments by bourgeois political parties, both in the United States and in Greece, shows their hypocrisy and opportunistic exploitation of the developments, so as to disorient the people from the fact that their policy nourishes and cultivates nationalism, racism and xenophobia. The policy of wars and the massacre of peoples abroad, poverty, oppression at home.

Racism and repression against the poor, people of color, or immigrants and refugees, is a manifestation of the rottenness of a system that murders and oppresses the many for the profits of the few. The virus is capitalism and it kills either by violence or poverty.

PAME, the class unions of Greece, express their solidarity and support in the struggle of the peoples, the workers of the whole world who unite their voices against injustice and racism, for a world where workers will live in brotherhood, without exploitation.